The minimum wage: who would win from a raise 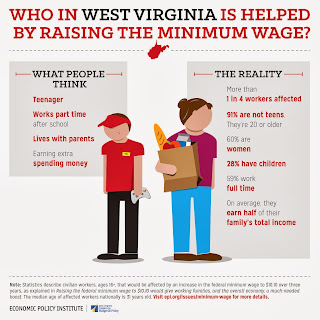 Here's a good infographic about the minimum wage from the WV Center on Budget and Policy. If you have trouble reading it, click here.

THE WRECKING CREW. Here's a look at the real costs of the government shutdown, including lost economic growth.

IT'S NOT ALL BAD. Here is the Charleston Daily Mail and WV Public Broadcasting on the farm to school movement in WV.

CONSOLATION. It's not just for humans anymore. It never was. 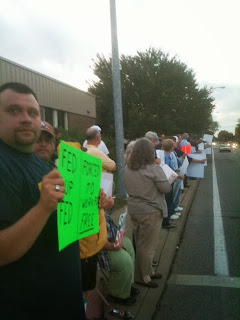 ...what was the point of the whole shutdown thing again? Did the shutdown wrecking crew get what they wanted out of this?

Talk about sound and fury signifying nothing. What a waste and what an irresponsible abuse of power.

Watching this sorry spectacle, I was reminded of a saying of Napoleon's: "Never interrupt your enemy when he is making a mistake."

(Of course, El Cabrero loves everyone and has no enemies. But the point remains...)

WHO PAYS? Here's another look at the social cost of low wages.

WHATEVER HAPPENED TO AMERICAN POLITICS? Here are some ideas.

MORE SPITE AT WORK. This item looks at the millions left out by the refusal of some states to expand Medicaid under the Affordable Care Act.

A look at what Americans love and what they don't.

From all the buzz about the series finale of Breaking Bad, you'd think Americans have a soft spot for meth cookers. Whatever the case may be with that, it looks like they love zombies even more.

As for congressional Republicans, not so much. A recent poll shows that 74 percent of Americans disapprove of the ransom/blackmail school of government.

Meanwhile, here's one interesting take on where the "American center" is politically these days. There's some good news and bad news.

At this writing, there's talk of an approaching debt ceiling/shutdown deal emerging from the Senate. That kind of news makes me wonder what they caved in on this time. I guess we'll know soon. At any rate, here's an interesting look at the folks who gave us the shutdown and how they look at the world. It's worth a look.

WEIRTON STEEL TO WAL-MART. Here's an op-ed by yours truly about how WV's economy has changed over the years. Mostly not in a good way. But there is some good news in there too.

FUN AND GAMES WITH THE AG. Here's an item by a friend of mine across the state about how WV's attorney general is working hard to keep people from getting health care.

IT'S NOT ALL BAD. German scientists are trying to raise drought resistant barley so we can still drink beer in a climate changed world.

GOAT ROPE ADVISORY LEVEL: ABOUT TO HIT THE CEILING
by El Cabrero No comments:

Who wins? WV for a change

It looks like West Virginia will be among the states that will most benefit from the Affordable Care Act, thanks in no small part to Gov. Tomblin's decision to expand Medicaid to low wage working people. You can compare it with other states here.

As for the states that aren't expanding Medicaid, and for the politicians who want to beat down the poor some more, an explanation might be found here.

PILLS ARE OUR FRIENDS, RIGHT? When he's not policing uteri or witch-hunting for midwives or trying to keep people from getting health care, WV's Attorney General is pretty cozy with a certain pharmaceutical company.

WHAT TO GET THE PERSON WITH EVERYTHING? Try a six foot salamander.