Looking under a rock

This op-ed of mine about the ugly history of so-called "right to work" legislation ran in today's Gazette-Mail:

The ancient Chinese sage known to us as Confucius was once asked what he would do if he ever came to a position of influence in a kingdom. His answer was a little surprising. He said he would begin with “the rectification of names.”

The 20th century writer and thinker George Orwell made pretty much the same point in his essay “Politics and the English Language,” where he wrote “In our time, political speech and writing are largely the defense of the indefensible. … The great enemy of clear language is insincerity.”

Misleading language, he argued, is designed to “make lies sound truthful and murder respectable, and to give an appearance of solidity to pure wind.” Hence the term Orwellian language. In his dark novel 1984, political slogans such as “War is peace. Freedom is slavery. Ignorance is strength” abound.

A great example of Orwellian language is a policy now being considered by the Legislature known by the misleading name of “right to work” (RTW). After all, who could be against the right to work?

Actually, the policy would lower labor standards, undermine the democratic process, weaken unions and allow free riders to benefit from collective bargaining agreements without providing dues to support the process.

Unfortunately many people today may not be familiar the ugly history behind RTW.

The person who came up with the name and launched the movement to enact it as law was a Texas businessman and politico named Vance Muse, who lived from 1890 to 1950. An unabashed racist and anti-Semite, he bitterly opposed the labor law reforms of the New Deal, which he sometimes referred to as “the Jew Deal.”

At the time, the labor movement was making huge advances and helping to build what would become the great American middle class. However, it faced serious obstacles in the south, where a racial caste system divided workers and kept wages low for everyone.

Vance and his allies in the “Christian American Association,” an organization he founded to promote RTW, were opposed to unions not only for their promotion of better wages and conditions but also for their potential threat to the system of racial segregation. But they soon gained powerful supporters beyond the south and began to win major victories.

According to Dartmouth historian Marc Dixon: “The Christian American Association out of Houston was the first to champion Right-to-Work as a full-blown political slogan in 1941. The organization stood out in a crowded field for its fiery rhetoric against President Roosevelt and especially labor. But Right-to-Work quickly moved from the fringe to the mainstream. After the war, organizations like the Chamber of Commerce and the National Association of Manufacturers championed the laws with great effect. By the early spring of 1947, fourteen states had adopted Right-to-Work, and the Taft-Hartley Act, passed by Congress later that year, solidified the rights of states to pass and enforce these laws.”

Muse was able to play on racial biases to promote RTW with considerable success — but not a lot of subtlety. At one point he warned that without such laws, “From now on, white women and white men will be forced into organizations with black African apes whom they will have to call ‘brother’ or lose their jobs.”

He promoted the rumor popular among some white segregationists that First Lady Eleanor Roosevelt was organizing subversive “Eleanor clubs” which supposedly encouraged black domestic servants to oppose their employers. At one point, he warned that such imaginary clubs were a “RED RADICAL scheme to organize negro maids, cooks and nurses in order to have a Communist informer in every Southern home.”

He also told supporters that anti-labor organizing would “keep the color line drawn in our social affairs.”

Ironically, back in the 1940s, labor organizers dreamed of launching “Operation Dixie,” which was to organize southern workers and overcome segregation. Instead, thanks to Orwellian language and bankrolling by billionaires and big business groups, Muse’s successors have rolled back labor laws in many northern states. And we may be next.

“In our glorious fight for civil rights, we must guard against being fooled by false slogans, such as ‘right to work.’ It is a law to rob us of our civil rights and job rights.

“Its purpose is to destroy labor unions and the freedom of collective bargaining by which unions have improved wages and working conditions of everyone. … Wherever these laws have been passed, wages are lower, job opportunities are fewer and there are no civil rights. We do not intend to let them do this to us. We demand this fraud be stopped. Our weapon is our vote.”

NOTE: sorry for slow posts. Goat Rope was offline several days this week when a falling tree took out some wired. Ahhh the joys of rural life.
by El Cabrero No comments:

As I mentioned in the previous post, I've been binge watching season 5 of The Walking Dead. I figure it's the best way to prepare for the 2016 session of the WV legislature. Last night I had to write down some words of wisdom from a character on the show:

If you feel safe enough to be bored, you're lucky.

I think that may well be the case. There are a lot of people around the world who would give just about anything for enough safety to be bored.
by El Cabrero No comments: 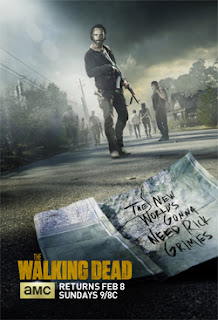 We interrupt Goat Rope's ceaseless stream of meaningful social commentary to make a personal announcement. For the next little spell, the Spousal Unit is away from the farm. This means, of course, that I am prostrate with grief, sadness, misery and such. It's a wonder I'm still alive, really.

More to the point, it means it's time to binge watch another season of Walking Dead! Season 5 to be exact, as I'm a year behind and have to wait for Netflix.

I've only watched two so far, and it may be too soon to speculate, but it looks like this one will be pretty grim. I mean, back in the good old days, only zombies ate people.

I really do wish that this series and other zombie apocalypse movies didn't remind me of the real situation in WV.
by El Cabrero No comments: