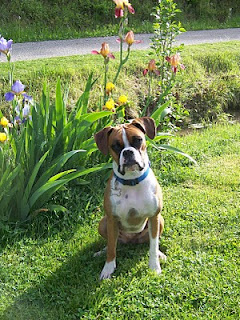 I don't think they were bred for this purpose, but somewhere along the way boxers, at least those of my acquaintance, seem to have become the clowns of the canine world. For them, life should be a merry round of mirth, play, food and sleep, a combination that works for me.

In addition to entertaining others, some, like Little Edith Ann, seem pretty good at entertaining themselves. Edith seems to have come up with several discrete games, which include:

*The cynodrome (which is what I think the Greek word is or should be for dog race). This is a pretty simple game and consists of running madly in circles or figure eights with no purpose other than joy;

*Bowling for chickens. While she is much too well behaved to kill or even hurt chickens, Edith cannot resist acting like a bowling ball and scattering them like bowling pens by charging into crowds of the fowl;

*Losing and finding. This game is usually done with a ball or similar toy and involves "losing" it by putting it under something like a piece of furniture and then "finding" it by digging it out or by bugging a human to retrieve it. It actually seems like she is enacting a story about losing and finding something, which come to think of it is a pretty good summary of thousands of movies and stories; and

*The gravity game. This one shows at least a bit of thought and something of the curiosity of a budding canine scientist. At some point, Edith became aware of gravity, at least to the extent of noticing that toys roll down hills if you put them in the right place. Sometimes she reminds me of a quadrupedal Galileo as she experiments with rolling and falling balls like her illustrious forbear in Italy.

The world would be a better place if more people and groups of people were better at entertaining themselves.

I have a feeling today will be out of the ordinary, due to two omens in the last 12 hours. First, my overeducated daughter would be pleased to know that I had a dream about a zombie apocalypse. A lot of it had to do with getting the right equipment. I'll spare you the gory details, but let me just say that if you're going to rumble with flesh eating walking dead you need good gear.

The second omen occured while jogging along Ben Franklin Parkway in Philadelphia, when I saw someone walking (or being walked by) a Great Pyrenees who looked like a smaller version of Arpad, my Sweet Little Angel Baby from Jesus in Heaven. I managed to hug the beast and asked the owner how one manages such a monster in the city. I was told it wasn't easy and that a lot of walks were involved.

Something must be in the air....

Where do good bills go when they die?

Here's more on the prison overcrowding bill that died on the last day of the WV legislature. The issue isn't going away, however.
by El Cabrero No comments:

El Cabrero is about to hit the road for a few days. Posts will be irregular since I don't have a functioning laptop and will have to steal time on other people's computers.

In the meantime, here are a few items...

GREECE AND US are discussed here by Paul Krugman.

THE POLITICS OF CATHOLICISM are discussed here by E. J. Dionne.

THE DEATH OF A GOOD BILL in the WV legislature is discussed here.

Well, the WV legislature just finished its 60 day regular session. It was better than some I've seen but right now it's the last thing I want to think about. Instead, here's some real important stuff:

HONEY BEES are strange critters. We've known that all along. But they may be even stranger than we thought. More on that here. I think it would be awesome if bees had personalities.

I LIVE AMONG DINOSAURS. This items suggests that iridescent feathers on dinosaurs evolved to attract mates. All I have to do to concur is look out the window at the behavior of our turkeys and peacocks.