Bad to the bone 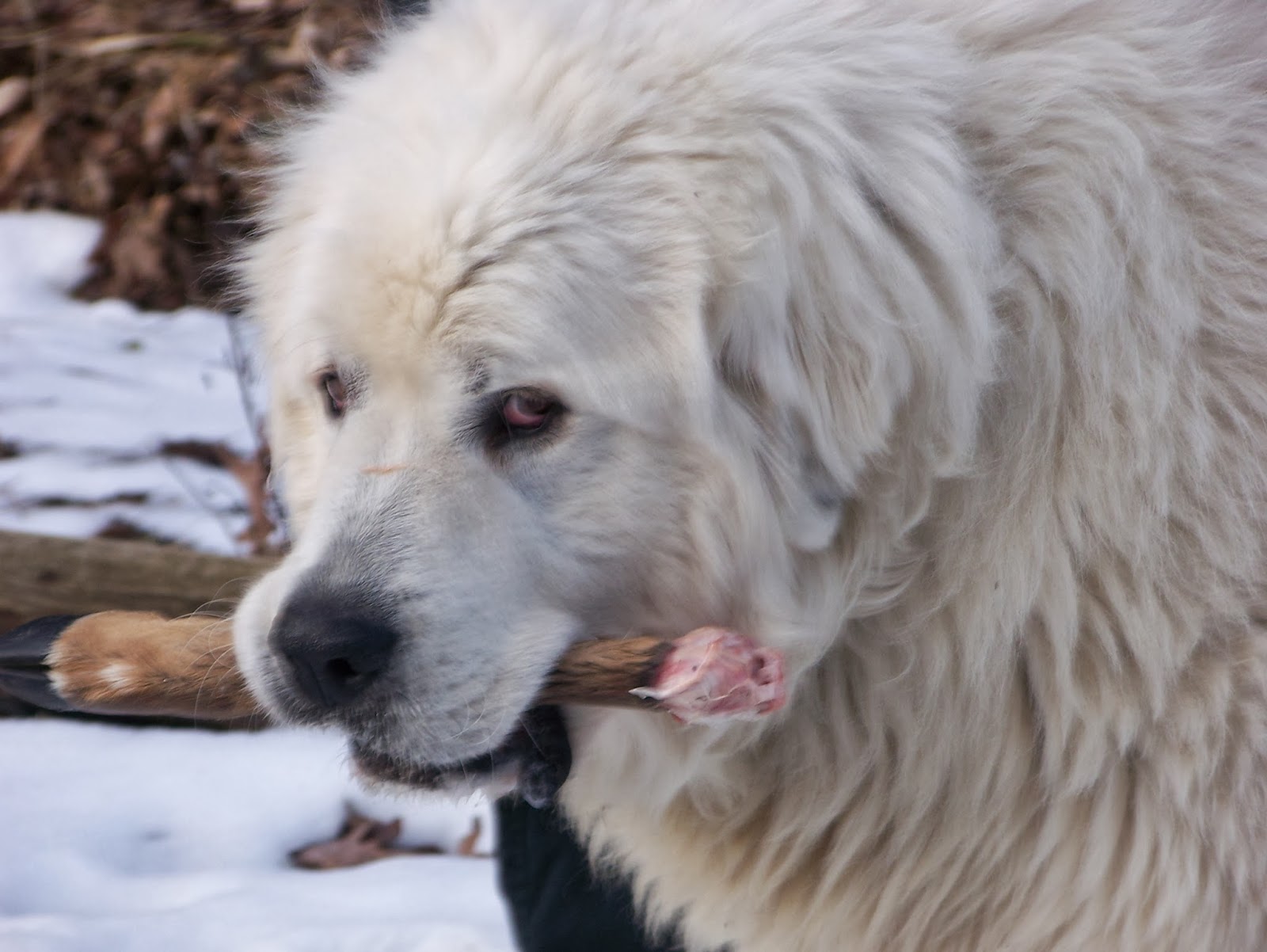 Arpad, the Great Pyrenees security chief at Goat Rope Farm, loves deer season and everything after. Here he is with another example of what he views as the generosity of the universe.

The question, as I see it, is is he just trying to get a leg up in the world or has he put his foot in his mouth?

MEANWHILE, BACK AT THE WV LEGISLATURE, interesting things are happening. A bill that would create a Future Fund or mineral trust fund, something El Cabrero has worked on for a few years, looks good in the state senate. It has 30 sponsors and there are only 33 senators. A minimum wage bill has moved from a house committee and seems to have strong support (even some who hate it are afraid to vote against it). And a bill that would promote physical activity in schools looks pretty good at the moment. The bill, called Move to Improve, is a companion piece to last year's Feed to Achieve Act.

Lots of other stuff too, but it'll keep.
by El Cabrero 1 comment:

Get ready for some political theater

I learned yesterday that the WV legislature is having a public hearing on our water crisis this coming Monday at 5:30.

Public hearings, for those who aren't familiar, are a staple of WV legislative politics. They are an occasion for political theater. Sometimes, they are a consolation prize for bills that are going to die but still have some support. Sometimes they are kind of random.

Whenever they have one on a topic of interest, I try to be there and sometimes to speak. Generally, they divide the total time by the number of people who want to speak to arrive at the the speaking time. It's usually pretty short, a minute or two.

I'm not sure how much political impact they have, but I've come to look at these events as an interesting English class/ rhetorical assignment: how can you deliver as pithy and sticky a message as possible within the limits? It's kind of like writhing a political haiku.

I'm working on my English homework now.
by El Cabrero No comments:

Leaving it on the table

El Cabrero has been an inconsistent blogger lately, but it's been a hard winter so far and I've been running around a lot.

On Tuesday, I attended a conference organized by the West Virginia Food and Farm Coalition. I'm glad I did, because it reminded me that, despite all evidence, there are good things going on.

The local food movement in this state--which touches on things like health, poverty, education, economic development, reducing carbon emissions, energy efficiency and most other things that matter--really has made some strides in recent years.

Here's one statistic tossed around today worth keeping in mind. West Virginians spend around $7 billion per year on food. Less than $1 billion of that is produced here. This means we're leaving a lot on the table as far as meeting local needs is concerned, and even more as far as we think about exporting.

So far, so good, but there's a lot more progress we can make.
by El Cabrero No comments:

In case you missed it, WV writer Denise Giardina had a lively response to a column by Froma Harrop that asked the question, "Is West Virginia a cult?" Giardina argues that a better word is colony, which is hard to deny. Still, Harrop does have a point when we have some people who brag about how much corporation-inflicted suffering they are able to bear--or politicians like Joe Manchin who talk about how West Virginians can do the "heavy lifting" needed to support coal at all costs.
by El Cabrero No comments: