The wheels on the bus

From earliest infancy, it has been the height of my ambition to spend the better part of two summer nights on an extremely uncomfortable bus seat in pursuit of a good cause. Imagine my delight when the opportunity came along this week!

Somewhere between Wednesday night and Thursday morning I joined a few hundred fellow West Virginians and thousands of Americans on a bus ride to DC to support health care for all Americans. The trip, lunch and tee shirts were provided by a WV local of the Communication Workers of America. 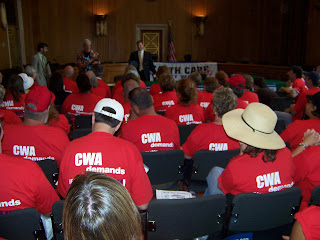 After the rally, state delegations held town hall-type meetings with congressional staff and elected officials. West Virginia's was packed and attended by the staff of senators Byrd and Rockefeller and representatives Rahall and Mollohan. Congresswoman Shelley Moore Capito did not attend or send staff. 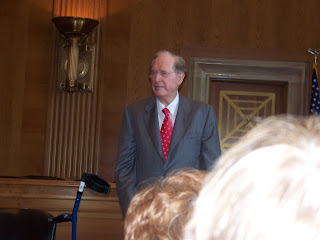 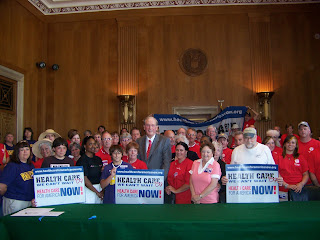 All and all a good time was had by all.

Here's some coverage by the Charleston Gazette and here's one of several posts on the AFLCIO blog.

Has anybody seen my spine?

Me tired. See y'all Monday 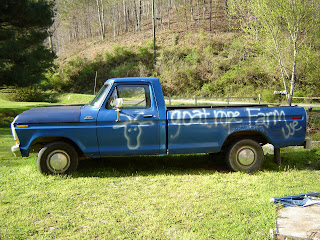 El Cabrero is not the world's biggest fans of marches or rallies in Washington. It's not that they're a bad idea; it's just that any tactic repeated too often tends to diminish in value.

Having said that, I'm in the process of spending a long hot day and a minimum of 16 hours of bus time attending what participants hope will be a decent-sized health care rally up that way. At last word, five buses were going from West Virginia alone.

Among the messages that I hope get delivered loud and clear are 1. that it's unacceptable that more than 45 million Americans lack health care and that many who do have some kind of insurance can't afford the coverage they have; and 2. if we're serious about health care reform, there needs to be a public option to compete with private plans.

This is a critical time for real health care reform in this country and it could be a long time before it rolls around again on the guitar if this chance is missed. As the saying goes, (no pun intended), this would be one of those times to leave it all on the road.

(Note: This post was scheduled to be published several hours after the bus left at midnight, so it may not have links to anything really good or bad that happened after Wednesday evening. In such cases, please accept congratulations or condolences as appropriate.)

((Final comment: if anyone starts singing "100 Bottles of Beer" on the bus, I may wind up doing jail time.))

I HOPE HE MEANS IT. Obama discusses the public option among other things here.

POLICY MATTERS. Some countries use labor market policies to reduce unemployment. The latest snapshot from the Economic Policy Institute looks at the example of Germany.

PLAIN TALK. By way of Coal Tattoo, the United Mine Workers of America takes aim at Massey CEO Don Blankenship.

WHALE CULTURE. Some of them may have it. What would Melville say?

IN ONE EAR BUT NOT THE OTHER. You are more likely to get what you want if you whisper in someone's right ear than the left.

Why we need health care reform 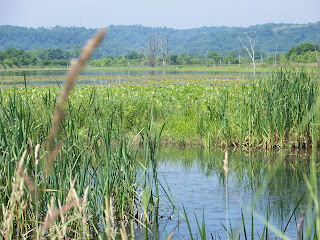 WV, like most of the US is swamped with health care problems.

Here are some state specific factoids about the state of health care (or the lack of it) in West Virginia from Health Care for American Now:

*For family health coverage in West Virginia during that time, the average annual combined premium for employers and employees rose from $6,844 to $11,970.

*The combined cost to employers and workers of health insurance for a West Virginia family of four is equal to 30 percent of the state’s median family income. Given current trends, that share will grow to 53 percent in 2016.

*The cost of employer-sponsored health insurance in West Virginia is growing at an annual rate of 8.5 percent, compared with a 1.8 percent growth rate for income.

*In West Virginia 13.8 percent of working adults reported spending 20 percent or more of their income on out-of-pocket health care expenses in 2004, a 48.4 percent increase from three years earlier.

*The Bureau of Labor Statistics estimates that 7.5 percent of West Virginia’s labor force was unemployed in April 2009.

*A recent report estimated that 62 percent of bankruptcies were directly related to medical bills; in West Virginia there were 5,133 non-business bankruptcies in 2008.

Those are admittedly just WV numbers, but while things may be a little different here it's pretty much the same story all over the country.

Houston, we have a problem...

ON THAT NOTE, here's more on the strong support Americans have shown for a public option in health care reform.

GETTING ON THE BUS. El Cabrero and amigos will be attending what we hope will be a major rally for health care in DC that leaves at midnight. I hear that five buses will be going from WV alone.

GREEN JOBS are a growing sector of the economy.

"SYNTHETIC TREES" may be a way of capturing atmospheric carbon.

FAMILY FRIENDLY? Mother's Day and Father's Day have come and gone while the US lags behind other industrialized nations in paid family leave for parents.

A GREEK IDEA: call no one happy until they have died.

STRANGE DAYS in the coalfields.

THIS IS YOUR BRAIN on junk food.

This is what can happen when you don't have health care.

Opponents of a pubic option for health coverage have been trying to scare people with the prospect of a government run health care system. As noted in yesterday's post, it isn't working.

There are any number of reasons for this but here's a big one: millions of Americans already receive health coverage from one form or another of public insurance. Consider:

Medicaid in 2006 covered almost 59 million Americans, mostly those with low incomes and/or disabilities.

And this doesn't count the many other kinds of health coverage directly or indirectly provided by federal, state, and local governments. What the country needs is a public insurance option to compete with private plans for those not eligible for the programs listed above.

AND WHILE WE'RE AT IT, here's Paul Krugman again on health care. He's worried that some senators want to party like it's 1993.

COAL'S COSTS outweigh its benefits, according to a new study. Here's Ken Ward's story from the Sunday Gazette-Mail and more from Coal Tattoo.

STATES FEEL THE PAIN of the recession as they make painful cuts or look for ways to raise revenue.

SOCIAL COMPETITION in early humans may made our brains get so big.

DEPARTMENT OF CORRECTIONS. El Cabrero has been busted more than once for yesterday's post which made a play on words about ducks when in fact geese were pictured. As one correspondent put suggested, a better caption might have been “We’re tired of getting goosed on health care.”

HAS ANYBODY NOTICED that I've managed to go four days without posting anything about Greek tragedy? It's really tough. 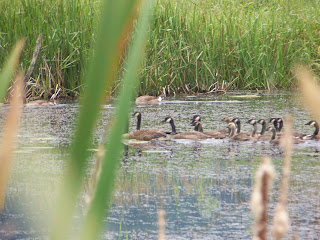 This is no time to duck the issue of real health care reform.

Right wingers in Congress and elsewhere have been trying to scare people lately with dark rumors of a "Washington takeover" of the nation's health care system. They are referring to the creation of a public option for health coverage for those who aren't covered adequately by private insurance plans. However, they seem to be way out of step with the American people.

Here are some of the findings from a New York Times/CBS poll:

Across a number of questions, the poll detected substantial support for a greater government role in health care, a position generally identified with the Democratic Party. When asked which party was more likely to improve health care, only 18 percent of respondents said the Republicans, compared with 57 percent who picked the Democrats. Even one of four Republicans said the Democrats would do better.

The national telephone survey, which was conducted from June 12 to 16, found that 72 percent of those questioned supported a government-administered insurance plan — something like Medicare for those under 65 — that would compete for customers with private insurers. Twenty percent said they were opposed.

In addition, 64 percent believed the government should guarantee coverage and nearly 60 percent would be willing to pay higher taxes to make sure everyone was covered. Support for a government option was strong across the political spectrum, with support from half of self-identified Republicans, around three-fourths of independents and nearly nine out of ten Democrats.

In El Cabrero's humble opinion, if any health care reform plan does not include a public option, they might as well leave things as they are--which is unacceptable. I hope this survey fortifies the will of the Obama administration as well as congressional leaders not to trade away the public option in a search for what Washington Post columnist E.J. Dionne has called "the bipartisanship of fools."