It's been over a month and I'm still having flashbacks from the WV legislative session. Not just from the more Whackadoodle moments on the extreme, but also disappointing moments about people on the more reasonable side who went along with bad policies even when they knew better.

One comment my friends heard more than once was "It polls well." This could be claimed for any number of bad issues, from drug testing welfare recipients to voter ID to time limits for SNAP to any number of other regressive policies.

I understand that in a (sort of) democracy politicians need to heed public opinion. I'm no politician, but I've certainly kept quiet about any number of issues that I didn't think were right. But even though we should pick our battles carefully, at times we also need to take stands that aren't necessarily popular.

By way of historical perspective, here's a list of other things that probably would have polled well in history:

*the crucifixion of Jesus;

*pogroms and persecutions of Jews;

In today's political climate (in more than one place), scapegoating defenseless groups polls well in some circles--and not just in the US.

Not to be too misanthropic or anything, but I think Nietzsche might have been onto something when he wrote that

“Man is the cruelest animal. At tragedies, bullfights, and crucifixions he has so far felt best on earth; and when he invented hell for himself, behold, that was his very heaven.”

And I think Camus was on track when he said this:

"We all carry within us our places of exile, our crimes and our ravages. But our task is not to unleash them on the world; it is to fight them in ourselves and in others.”

This op-ed of mine on SNAP (formerly food stamp) benefits and hunger appeared in today's Charleston Gazette-Mail.

I’m pretty sure that being poor isn’t nearly as much fun as people who aren’t poor think it is. At least that was the case in the time I spent below that line and I’d just about bet the farm that’s still the case.

The best description I ever found of what it’s like came from the late writer Earl Shorris, who described poverty as living in a “surround of force,” which makes you feel like a hunted animal, always reacting or getting ready to react to the next threat, with little chance to relax or reflect.

He put it this way: “The poor, those who lose in the game of modern society, are thrust into a surround of force. Inside the surround, they experience anomie: panic is limitless action within a surround, but the surround ruthlessly limits the freedom of its objects by enclosing them.”

Bruce Springsteen summed it up pretty well too: you “end up like a dog that’s been beat too much till you spend half your life just covering up.”

Another person who got it right over 100 years ago was the American writer Jack London in his 1902 book “People of the Abyss,” about urban poverty in London. It describes the fragile condition of several individuals and families trying to scrape by, only to be undone by a mishap that those with more means would scarcely notice.

An accident, an illness, a downturn in the economy and the game is up. The words “And then the thing happened” run like a sad refrain through the book.

A lot of things have changed since then, but some things haven’t. Then or now, if you’re living on the edge, the least bump in the road can set off a downward spiral.

That’s one of the main reasons I’m concerned that as many as a million Americans — and several thousand West Virginians — are in danger of losing basic food assistance through SNAP, the Supplemental Nutrition Assistance Program formerly known as food stamps.

(The benefits these people rely on aren’t all that generous to start with. If you don’t believe that, try living for a month on a $2-per-meal budget and see how that works. You’ll also see why food pantries get busy at the end of the month.)

Some states with low unemployment rates are imposing strict SNAP time limits and work requirements on working age adults without dependents due to federal mandates. People who don’t meet them can lose food assistance for three years. West Virginia isn’t required to do so, yet it is imposing the same restrictions in nine pilot counties which are home to around 47,000 such adults. These changes are well-intentioned at the state level. I’m all for getting more people back to work and/or participating in education and training. Who isn’t?

However, unless we get this right, this could hurt people who are looking diligently for work but haven’t found any yet. As one advocate from South Carolina put it, “It doesn’t matter how hard you’re looking. If you fill out eighty applications a day, if you don’t have the eighty hours a month then it doesn’t count. You’re going to lose your SNAP benefits for three years.”

It could also impact people who have jobs but can’t find steady work at 20 hours or more per week. According to Shawn Fremstad of the Center for Economic and Policy Research, “We’ve seen a long-term trend toward more precarious job conditions for low-skilled workers. Even if you get a job, you’re not guaranteed more than 20 hours a week.” While there are provisions to allow for volunteer hours to make up the difference, many people may not be aware of this option.

SNAP changes could also impact people who have physical or mental disabilities that haven’t been officially recognized as such or who have other obstacles such as lack of transportation. And it could take millions of dollars away from local businesses and further stress already over-burdened local food pantries and charities.

The West Virginia Department of Health and Human Resources is doing a good job of screening and working with this population, but as of last week, over 4,000 were in danger of losing food assistance.

Fortunately, there are ways of making SNAP work requirements work for everyone which may be worth consideration. In Franklin County, Ohio (think Columbus), for example, local food assistance programs and the Ohio Association of Food Banks have come together to create a Work Experience Program which actually meets one-to-one with those affected.

“Our findings indicate that many of our clients struggle with accessing reliable transportation, unstable living conditions, criminal records, education, and both physical and mental health problems,” they report.

The understanding gained by actually talking to people there led to better understandings and outcomes that help them “navigate through many of their challenges, giving our clients a better chance at improving their lives and supporting themselves.”

That’s a worthwhile goal and one that I think people of good will could agree with across the political spectrum.

I’d like to see the state take the time to get it right. 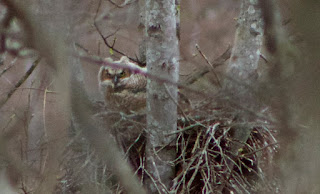 Spring is here and one unexpected sign of it is a baby great horned owlet that was recently born on our hill. He (or she) is pretty cute.

Speaking of spring, here's a great quote about it by George Orwell. I posted this on Facebook a while back. Sorry for the duplication but something this good deserves to be read more than once.

“ I think that by retaining one’s childhood love of such things as trees, fishes, butterflies and—to return to my first instance—toads, one makes a peaceful and decent future a little more probable…

At any rate, spring is here...and they can't stop you enjoying it. This is a satisfying reflection. How many a time have I stood watching the toads mating, or a pair of hares having a boxing match in the young corn, and thought of all the important persons who would stop me enjoying this if they could. But luckily they can't. So long as you are not actually ill, hungry, frightened or immured in a prison or a holiday camp, spring is still spring. The atom bombs are piling up in the factories, the police are prowling through the cities, the lies are streaming from the loudspeakers, but the earth is still going round the sun, and neither the dictators nor the bureaucrats, deeply as they disapprove of the process, are able to prevent it." George Orwell, Some Thoughts on the Common Toad

Orwell didn't explicitly mention owls, but I think he'd be down with them.
by El Cabrero 1 comment:

I think it was mostly luck and an unforeseen and unforeseeable outbreak of rationality in the recent WV legislative session, but the Mountain State managed not to pass one of those controversial "religious freedom" bills that are a license to discriminate. Similar bills have been causing controversy--and costing money--in several states. It's nice that we managed not to embarrass ourselves, even if it was kind of an accident.

Meanwhile, this NY Times article on inequality, longevity and geography is worth a look. For some reason, we didn't look too bad in this one either.

NOTE: for some reason, the several  hundred odd (no disrespect intended) people who subscribed to this blog via email haven't been getting it for a while. I'm going to try something. Please let me know if it works if you happen to get this and read it. Thanks!
by El Cabrero 6 comments:

Many years ago, when I was new to the fight for social justice, and when I was neck deep in my first righteous fight (the Pittston coal strike), and before most of the hope for the universe evaporated, a very dear friend gave me a wonderful birthday present. It was John Prine's first album.

I had no idea who Prine was, but I pretty much burned out that cassette. I loved Prine first as a listener. Then as a budding guitar player (with four chords you can make it through quite a bit of his opus, no disrespect intended). Then as someone with something of a hillbilly accent, a distinct advantage when singing his songs.

The height of my experience as a tweeter, i.e. one who tweets on Twitter, happened when I referenced one of Prine's songs as a possible new official WV state song (title: Some Humans Ain't Human) and which @JohnPrine himslef liked.

When that happened, like Wayne and Garth with Alice Cooper in Wayne's World, I nearly hurled.

Anyway, all that is an overly long introduction to this link to a great NY Times story on Prine.

I just might tweet it after posting. And if he "likes" it, I think I'll just DIE!!!!