Of fat cats and three for the road 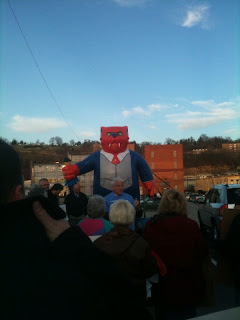 2011 is a pretty good year for fat cats. Here's a picture of a rally held yesterday in Charleston calling on congress to extend unemployment insurance. The rally was supported by union members, the usual suspects, and people from Occupy Charleston, some of whom just got back from rampaging around Washington DC.

JUST WHEN YOU THOUGHT IT WAS A LITTLE SAFER TO GO UNDERGROUND. Here's the latest on former Massey CEO Don Blankenship's latest coal maneuvers. (It occurred to me that the last few days may have been a bit of a PR setback.)

FRACKED UP. I am shocked, shocked at this report suggesting that hydraulic fracking may not be good for water supplies and human health. I'm glad that WV politicians and industry hacks are already at work denying this.

Lies, damn lies and more of the same

According to the ancient Greek philosopher Heraclitus, "War is the father of all things." I think strife was more what he was getting at in that famous statement but you get the idea. According to Darwin, all life is a ceaseless struggle for existence. And according to Sun Tzu, "All warfare is based on deception."

All of which points to the fact that the living world of nature isn't just all about strife; it's also all about deception. Animals and even plants have evolved elaborate methods of camouflage. Natural examples of deception abound when it comes to eating and being eaten as well as in mating rituals and dealing with others of the same species. In strictly Darwinian terms--which aren't very nice--the ability to deceive rivals, prey and even potential mates had an adaptive value.

No wonder we're so good at it. I recently read a book about evolutionary psychology that suggested that the well known ability of humans to deceive themselves may have been adaptive as well. That would explain a lot...

Lies and cheating are a major subject of contemporary psychological research, as this item from NPR about cheating reports.

I think you'll find it worth a look. Honestly.

BEACHFRONT PROPERTY could be coming to you. Not in a good way.

Here's some of the latest coverage on the settlement of the Upper Big Branch mine disaster from the Charleston Gazette (special focus on the reactions of the families), the New York Times, the Washington Post; and NPR.

As always, the best place to go for all things coal is Ken Ward's uber-blog Coal Tattoo.
by El Cabrero No comments:

In the immortal words of Bob Dylan, "Things are going to get interesting right about now." The federal Mine Safety and Health Administration will release its report today on Massey Energy's Upper Big Branch mine disaster which killed 29 miners. More interestingly, federal prosecutors will be briefing family members about the state of their ongoing investigations. Let's hope there's way more to come. Here's what we know now by way of Ken Ward in the Charleston Gazette.
More to come.
by El Cabrero No comments:

Regarding daughters, doctorates and zombies

So my daughter (that would be the one with the advanced degree) announced this weekend, without a trace of apparent irony, that the television series The Walking Dead actually reassured her that a zombie apocalypse could be managed, thanks in part to the stupidity of said zombies. I wasn't sure whether to laugh or cry.

ON A SLIGHTLY DIFFERENT NOTE, here are two takes on the current state of American politics by Dionne and Krugman.