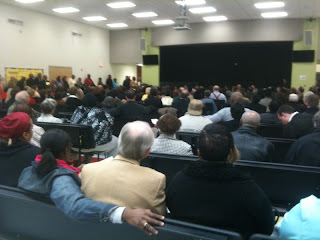 Members of the Kanawha County Board of Education got an earful last night as hundreds of community members turned out for a special meeting to support adding the name of the late Mary C. Snow, a prominent Charleston African American educator, to the name of the West Side Elementary School. The meeting came about due to community mobilization led by the Tuesday Morning Group, a coalition of black and white and religious and secular community advocates for social and racial justice

I think several factors drove the big turnout, not least of which are community anger over being treated with disrespect and sadness over the disappearance of local black history. The history of the name issue goes back to 2009 when the board adopted a flawed process for naming the school. Read more here and here.

Last month, board members voted 3 to 2 to oppose adding Snow's name. The most bizarre moment last night came when board member Becky Jordon, who opposed the change, basically attacked the audience, telling them "Don't just come out here when you want to complain about a name."

She obviously didn't get the fact that it wasn't just about the name. Or the fact that many of the people pushing hardest for the addition of Snow's name are also those who work hardest to help disadvantaged children and adults in that community and to make the school succeed.

About the only people there who didn't support the name change were the board majority and school staff, who may or may not have been pressured to support keeping the current name of West Side Elementary School, which one person observed was "a location, not a name."

It was sad to see board members and educators squandering support for a community school and digging in over this rather than graciously yielding and accepting the win/win compromise of naming it Mary C. Snow West Side Elementary School--a step that even school superintendent Ron Duerring publicly supported last night

There were some great zingers last night from those who attended. One of my favorites was when a speaker contrasted Snow to other dead people who had schools named after them in the county: "I am supremely confident in that Mary Snow did a lot more for the education of Kanawha County students than George Washington, Stonewall Jackson, Andrew Jackson and Herbert Hoover combined."

Tom Rodd, a local attorney who previously clerked for state supreme court justice Larry Starcher, quoted African American state justice Franklin Cleckley on the value of changing one's mind when better information emerges. When he changed his mind in a case decision, Cleckley said "I will take refuge in an aphorism of Justice Felix Frankfurter: 'Wisdom too often never comes, and so one out not to reject it merely because it comes late.'"

It is stupid and tragic to see such people treated with disrespect--and it's not very smart to treat your allies that way. You just might need them some day.

I had intended to blog about something else today but have been overtaken by unforeseen circumstances. Although I have tried to do what I can with Goat Rope, mine eyes have now beheld a blog beyond which no greater blog can be conceived. I am bound by my code of honor to admit it when I have been outgunned, or in this case out-dogged.

The supreme blog that I hereby acknowledge is titled Food on My Dog and is pretty much entirely composed of pictures of a very compliant dog with various food items on its head.

Look upon it, ye mighty, and despair.

In praise of muscle memory

A chance conversation with a fellow student after karate class last night prompted me to muse once again on good old muscle memory. A karate dojo is at least in part a place where you go to develop muscle memory. Martial artists train so they don't have to think

People have all kinds of "progressive" theories of learning, but when it comes to something you are really going to use--or something on which your life or the lives of others might depend--the smart money is on drill and repetition rather than thinking. If we really did have to stop at every point and consciously deliberate over next steps, not much would get done. And a lot of it would get done badly.

Drill is a way of making something a habit. And habit is what Aristotle, "master of those who know" according to Dante, famously described in his Ethics as "second nature."

Keyboarding is a case in point. El Cabrero is ancient enough to remember when typewriters ruled the world. When I was in high school, before the personal computer revolution, I took a typing class. This was something a bit unusual for a boy to do. Thank God I did it. I'm no speed demon, but my fingers know which way to go. I can't imagine what life would have been like with the hunt and peck method. And that's just one example.

OCCUPYING OUR MINDS. Here's NPR on the unlikely impact of an unforeseen protest movement.

AND THE WINNER IS....Here are the "insect awards" from Wired Science.

An idea for the future

The WV Center on Budget and Policy has been making noise for a while now about how our state can position itself to benefit for the long haul from extractive industries by creating a permanent mineral tax trust fund.

The basic idea is pretty simple, although it could be done in many different ways: set aside a portion of severance taxes for the fund, allow it to build over time and use the interest to fund vital projects. Several states, mostly out west, have already done this and are reaping the benefits.

As a new report from the Center on the subject argues,


A bill to do something like that has been introduced in the state senate, where it was sponsored by senate president Jeff Kessler. Here's hoping the bill makes it. Forward thinking like this is long overdue in West Virginia.

As I've said before in an op-ed for the Gazette, if WV had done something like this decades ago with coal, the southern part of the state might look like Shangri-la by now.
by El Cabrero 2 comments:

Overwhelmingly but with some exceptions, participants in the Occupy movement have adopted, often explicitly, nonviolence as a method of action. However, in some places there are those who argue for "a diversity of tactics," which basically seems to consist of throwing things at cops.

Presumably such people believe that this is the best way to win over the hearts and minds of the 99 percent they claim to represent.

Sorry, but the most charitable thing I can say about that approach is that it is, in one of the Spousal Unit's favorite phrases, "dumber than dog ****." I say that not only as someone who works for a Quaker organization that promotes nonviolence, but also as a gun owning Gandhi-allergic Scotch Irish hillbilly with a black belt.

This has nothing to do with any belief on my part regarding the moral arc of the universe, the evidence for which is underwhelming to me most days. It comes down to this: as much as some seem to like throwing stuff as a method of change, the rulers generally have way more stuff to throw. And they can throw it harder. Second, most people are not all that turned on by the sight of people throwing stuff.

It seems to me but simple prudence to avoid giving one's opponent the excuse and/or ability to crush and/or totally discredit and isolate you unless there is a compelling reason to do so and I don't imagine that happens very often.

As a friend of mine once said about ultra "left" groups that engage in provocative action, "If they're not getting paid by the other side, they're getting ripped off."

IT'S MONDAY so it's gotta be Krugman bashing austerity.

HISTORY IS MESSY, so the Tennessee Tea Party wants to clean it up--by keeping slavery and such unsavory matters of American history out of the textbooks.

WHAT IS 24 MILLION GENERATIONS? If we were playing Jeopardy, that would be the number required for mouse sized mammals to evolve to elephant proportions assuming natural selection was favorable.