So earlier this week the Spousal Unit and I went to our favorite Italian restaurant. We had a good meal and a good time but it kinda got spoiled. In order to prepare for the next Front Porch podcast, I promised to listen to the debate between WV's two main candidates for governor. It was a buzz kill.

I should have stuck to my usual practice of talking about stuff I know nothing about, like I do here.

Anyhow, here's a link to the podcast. I think it's better than the debate anyway.
by El Cabrero No comments: 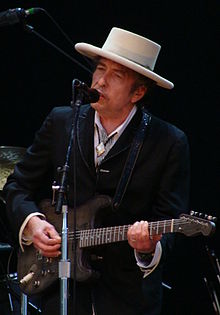 My day started with some good news that carried me through it, so far anyway. I am of course referring to the news that Bob Dylan had been awarded the Nobel Prize for literature.

I'm not sure this is a good thing, but Dylan has supplied the soundtrack of my life. I first became aware of his work, without knowing who he was, as a little kid when my late brother came home from college with a guitar and plunked out "Blowin' in the wind." The delivery didn't get me but the lyrics did.

I've said it before and say it again: Bob had--and has--the power of the word.

There were other times in my life when he struck me cold, like the time in my teens when I heard "Tangled up in blue" in a store.

Eventually I found out who he was and started digging into his work.

Of course, when you talk about Bob, you have to be more specific, as in which one? There's folkie Bob, political Bob, hipster Bob, country Bob--and that just gets you through the 1960s, There's way more. I tend to prefer the middle and older, more obscure Bob these days.

The intimacy between his music and my life is such that I've been know to buy the latest Dylan album to find out what I've been up to.

(I can also grade seasons of my life by Dylan album. Street Legal phases are kind of downers...)

I have no idea if he writes consciously or is just the vessel of the muses, although I lean to the latter hypothesis. I was once at an Arlo Guthrie concert where he speculated that Dylan fished for songs upstream so he could catch more than anybody else.

I hope he keeps on catching them. Congratulations, Bob!

(I just checked the Goat Rope archives for all the times Bob has been mentioned here. It's quite a bit.)
by El Cabrero No comments:

I mentioned in a blog post last week that there was a major breakthrough in police/community relations in, of all places, Charleston WV. Here is a blog post by my co-worker Lida Shepherd about how all this came together.

And here's how it starts:

Editor’s note: As cities across the U.S. continue to grapple with issues of racist police violence, Charleston, West Virginia made headlines last week when its police chief and local community groups announced a plan to improve race relations in the city.

Lida Shepherd with the AFSC West Virginia Economic Justice Project was part of the 14-month collaborative planning process that led to this remarkable agreement.


Our first meeting with Chief Brent Webster of the Charleston Police Department in October of last year was slightly tense. We were sitting around the table to discuss the fact that the arrest rate of Blacks in our small city of just over 50,000 people was more than double that of whites.

Before getting into the problem at hand, we each shared our personal thoughts on why it was important to address racism—a dialogue that emphasized this meeting was not about singling out the Charleston Police Department as a racist institution but rather addressing the broader problem of systemic racism that plays out not only in our city but across our nation.

(It's a good story, and one that I hope will get better. Click the link above to read the rest.)

Read it and weep

I'll say it again, it's time to shelve West Virginia's old state motto, "Mountaineers are always free" and replace it with something more fitting. (Although I hope we can reinstate the old one when conditions change.)

My nomination for the motto has oft appeared here. It's "You can't make this **** up." I was hoping to come up with a Latin version, but the Republican controlled state legislature declared English to be the official language.

Perhaps that will save the billions of dollars currently spent on printing official documents in Urdu...

The most recent example of why we should use the new motto can be found in the publication from prison by former Massey Energy CEO Don Blankenship titled An American Political Prisoner.

Ken Ward at Coal Tattoo had this to say about that here. The truly...interested can read the whole document here. I actually skimmed it.

Let's just say it ain't Letter from a Birmingham Jail.
by El Cabrero No comments: