A walk in the woods 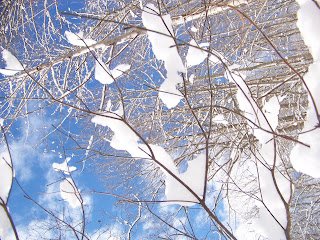 I am not the biggest fan of winter 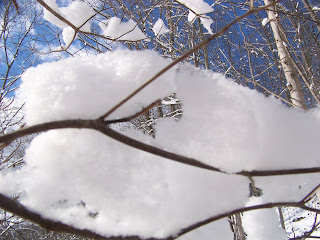 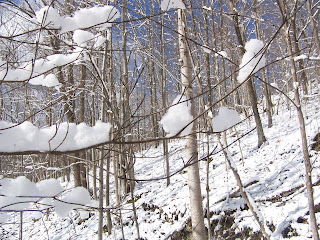 But when it first comes, there's nothing like a walk in the woods 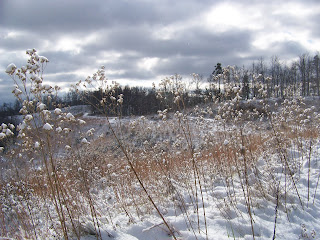 if it's not too cold 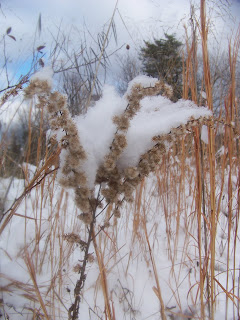 There are always interesting things to see 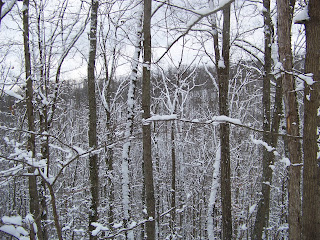 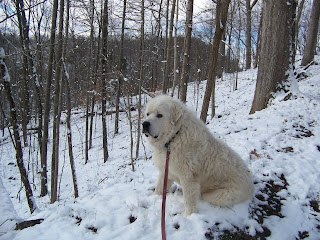 Besides, Arpad loves it.
by El Cabrero 2 comments:

Those difficult gift decisions (and a half hearted defense of peacocks) 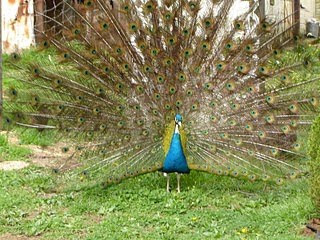 A few days ago, Alternet ran an article about what to get for that billionaire on your Christmas list. It was pretty humorous, although I have to take issue with the first item on the list, to wit a peacock. The writer says that this gift "Provides the double benefit of being both the ultimate symbol of excessive extravagance and extremely difficult to care for."

OK, so they are extravagant, presuming we're talking about the male's tail feathers in the spring and early summer. But you can't really blame the bird for that--you'd have to blame sexual selection, which is to say, peahens. The males have big tails because having one helped their male forebears to reproduce.

I don't even think of them as being domesticated the way chickens are. They're more like loud, romantic, decorated, seasonal dinosaurs.

DEAL OR NO DEAL. Here's a statement from the National Employment Law Project on the Obama administration's "deal" with congressional Republicans (which may or may not happen). And here's Paul Krugman's latest column on the same.

MONEY AND POLITICS. There seems to be some connection.

URGENT ANCIENT INDONESIAN HOBBIT UPDATE. It looks like they had giant storks for company. 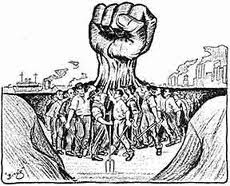 Yesterday's post featured a song by my friend and co-worker Arnie Alpert, aka New Hampshire Slim. Just to show that he's not a one-trick pony, I'm featuring today another of his recent efforts.

As I mentioned yesterday, Arnie's work has appeared in the Industrial Workers of the World's Little Red Songbook. I like to think of him as a latter day Wobbly, riding the rods, booming into the hobo jungles, putting up silent agitator stickers in lumber camps, speaking to the masses on soap boxes and regaling his fellow workers with subversive songs. I like to think of him doing these things, although I don't think he does a lot of them. Maybe the regaling.

Again, you know the tune. Enjoy...

FAUST, REVISITED. Here's Lawrence Mishel of the Economic Policy Institute on the Obama administration's deal with Mephis...I mean some people in Congress:

Who got what out of (Monday's deal between President Obama and Republican leaders) is clear. The Republicans got tax cuts for the best-off two percent and lower estate taxes for the very wealthiest families, neither of which will do much if anything to create jobs. President Obama won policies that will put or keep money in the pockets of the unemployed and middle and low-income families, which will increase spending and create jobs. That’s what a payroll tax holiday for workers, unemployment benefits and the various tax credits will do: create customers for business and create jobs, which is our biggest need right now.

In two years, the American people will have a clear choice about who the tax code will favor. That debate will, I hope, highlight the hypocrisy of those wanting to deepen the deficit by extending tax cuts for the rich while simultaneously cutting health care, Social Security and domestic public investments in the name of deficit reduction.

And, while we're at it, here's Paul Krugman's take on it.

MISSING THE MOMENT. This item looks at what happened with the failure of climate change legislation.

THE DREAM REVISITED. Some people are scaling back their version of the American dream. 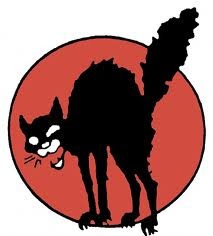 I have a friend and co-worker in New England who loves to re-write old songs to bring them down to date in the manner of the Wobblies of old. Arnie Alpert, aka New Hampshire Slim, has even had his work appear in recent editions of the Industrial Workers of the World's Little Red Song Book.

In the spirit of Joe Hill, Ralph Chaplin, T-Bone Slim and Haywire Mac McClintock, here's one of his newest offerings, inspired by current events. You know the tune.

God bless you very wealthy men,
Good news I have to tell:
The market’s back, you’re making more
Each time you buy and sell.
With layoffs more, your profits soar,
You’re living rather well.
O tidings of capital gains.

God bless you very wealthy men,
Your friends are working late,
You do not have to fret that you’ll be taxed on your estate,
Your kids for sure will be secure
Their lives will all be great
O tidings of capital gains.

God bless you very wealthy men,
The richest one percent,
Collect one-fourth of all income,
We don’t know how it’s spent.
This is no joke, the systems broke
It is not merely bent.
O tidings of capital gains.

God bless you very wealthy men,
Do you repeat this song?
You owe success to your hard work, no one helped you along.
You’ve raised yourself to the top shelf;
Your bootstraps must be strong.
O tidings of capital gains.

God bless you Wall Street gamblers,
Your lifestyle’s very swank
Your taxes slashed, your check’s been cashed,
Your bail-out’s in the bank.
You do not have to worry that our
Jobs are in the tank
O tidings of capital gains

ON THE DEAL. Here's Robert Greenstein of the Center on Budget and Policy Priorities on the unemployment/tax cut deal between President Obama and congressional Republicans.

MASSEY ENERGY stocks jumped earlier this week in reaction to the announcement of the retirement of its CEO. The AP reports that Don Blankenship will receive at least $12 million in his severance package.

...there’s no question that Blankenship’s departure from Massey also costs environmentalists and labor unions not only an easy nemesis, but steals from them some rare common ground. Without Blankenship to jointly hate, will coal miners and other coalfield residents fight more amongst themselves or perhaps find ways to more forward together?

Interesting question. While Blankenship was a polarizing force, he was also a unifying one, in the sense that he gave people who disagree on other issues something to agree about.

UNSAVORY DEAL. It looks like the Obama administration has reached a deal with congressional Republicans to extend Bush tax cuts for the rich in exchange for extending unemployment and some other measures, which has some Democrats hopping mad.

SLACK MARKET. According to this Economic Policy Institute snapshot, 17 percent of American workers (or worker wannabees) can't find the amount of work they want.

WHO'D A THUNK IT? Battlefields might be going greener.

The end of an era 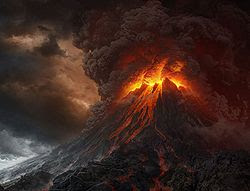 Friday evening, the Spousal Unit and I attended an event supporting health care reform. While there, a friend showed me an email message from her smart phone that said that Massey Energy CEO Don Blankenship announced plans to retire.

(Another friend at that moment, who happens to be a fellow Tolkien geek, said something about Frodo and Sam melting the Ring in Mount Doom...)

I didn't believe the news at first, not because I didn't trust the messenger, but I just had trouble believing was real. There had been rumors for some time about a possible sale of the company, a step that Blankenship was said to oppose. Many people believed that decades of excess had finally caught up with him, the Upper Big Branch mine disaster being one of the last straws. Many of us believed that something had to give. Still, it was just hard to believe that it finally happened.

This story is bound to unfold more over time, but it seems clear to me that Blankenship was finally overtaken by his own excesses, which eventually convinced shareholders and others involved in the industry that a change was needed. I had long believed that national media exposure was a weak point, one that would eventually convince decision makers that his kind of leadership was a liability.

Nobody knows what the future holds for the company or its former leader, but I have two initial guesses. First, whoever eventually takes over or buys that company is unlikely to be as excessive on all fronts as the former leader. Second, while Blankenship will no doubt walk away with a big severance package, I doubt that he will wield the same power in the future as he did when he ran a major company and controlled thousands of jobs.

DISAPPOINTING VOTES. The US Senate tried and failed this weekend to reach a deal on the Bush era tax cuts and extending unemployment insurance. A deal may be near that will grant the latter at the expense of the former.

SPEAKING OF WHICH, here's a look at long term unemployment, the damage it does, and alternatives to the current unemployment insurance system.

CHANGING THE CLIMATE of climate change discussions, scientists are rethinking how to get the message across.

DOH! A conservative WV group that obsesses way too much about homosexuality has links to a national organization identified by the Southern Poverty Law Center as a hate group.

LIFE AS WE DON'T KNOW IT. New research indicates that life on earth is a little weirder than previously thought, which means life on other planets might be stranger still.