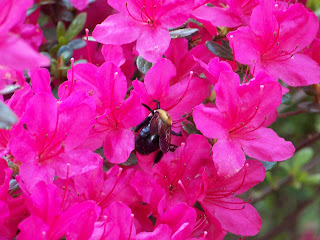 And truly, I reiterate, . . nothing's small!
No lily-muffled hum of a summer-bee,
But finds some coupling with the spinning stars;
No pebble at your foot, but proves a sphere;
No chaffinch, but implies the cherubim:
And,–glancing on my own thin, veined wrist,–
In such a little tremour of the blood
The whole strong clamour of a vehement soul
Doth utter itself distinct. Earth's crammed with heaven,
And every common bush afire with God:
But only he who sees, takes off his shoes,
The rest sit round it, and pluck blackberries,
And daub their natural faces unaware
More and more, from the first similitude. 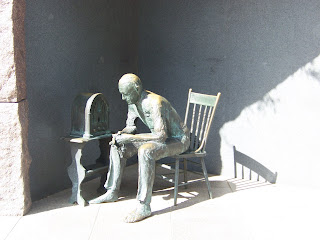 "The basic things expected by our people of their political and economic systems are simple. They are:

Equality of opportunity for youth and for others.

Jobs for those who can work.

Security for those who need it.

The ending of special privilege for the few.

The preservation of civil liberties for all.

The enjoyment -- The enjoyment of the fruits of scientific progress in a wider and constantly rising standard of living.

These are the simple, the basic things that must never be lost sight of in the turmoil and unbelievable complexity of our modern world. The inner and abiding strength of our economic and political systems is dependent upon the degree to which they fulfill these expectations.

Many subjects connected with our social economy call for immediate improvement. As examples:

We should bring more citizens under the coverage of old-age pensions and unemployment insurance.

We should widen the opportunities for adequate medical care.

We should plan a better system by which persons deserving or needing gainful employment may obtain it.

I have called for personal sacrifice, and I am assured of the willingness of almost all Americans to respond to that call. A part of the sacrifice means the payment of more money in taxes. In my budget message I will recommend that a greater portion of this great defense program be paid for from taxation than we are paying for today. No person should try, or be allowed to get rich out of the program, and the principle of tax payments in accordance with ability to pay should be constantly before our eyes to guide our legislation.

If the Congress maintains these principles the voters, putting patriotism ahead pocketbooks, will give you their applause.

In the future days, which we seek to make secure, we look forward to a world founded upon four essential human freedoms.

The first is freedom of speech and expression -- everywhere in the world.

The second is freedom of every person to worship God in his own way -- everywhere in the world.

The third is freedom from want, which, translated into world terms, means economic understandings which will secure to every nation a healthy peacetime life for its inhabitants -- everywhere in the world.

The fourth is freedom from fear, which, translated into world terms, means a world-wide reduction of armaments to such a point and in such a thorough fashion that no nation will be in a position to commit an act of physical aggression against any neighbor -- anywhere in the world.

That is no vision of a distant millennium. It is a definite basis for a kind of world attainable in our own time and generation. That kind of world is the very antithesis of the so-called “new order” of tyranny which the dictators seek to create with the crash of a bomb.

To that new order we oppose the greater conception -- the moral order. A good society is able to face schemes of world domination and foreign revolutions alike without fear.

Since the beginning of our American history we have been engaged in change, in a perpetual, peaceful revolution, a revolution which goes on steadily, quietly, adjusting itself to changing conditions without the concentration camp or the quicklime in the ditch. The world order which we seek is the cooperation of free countries, working together in a friendly, civilized society.

This nation has placed its destiny in the hands and heads and hearts of its millions of free men and women, and its faith in freedom under the guidance of God. Freedom means the supremacy of human rights everywhere. Our support goes to those who struggle to gain those rights and keep them. Our strength is our unity of purpose.

To that high concept there can be no end save victory."

--excerpt from Franklin Delano Roosevelt, State of the Union Message to Congress, Jan. 6, 1941

ALMOST BACK but not quite. El Cabrero is still off. This post was scheduled in advance and does not reflect any breaking news. I hope things are just peachy.

The test of our progress

"But here is the challenge to our democracy: In this nation I see tens of millions of its citizens—a substantial part of its whole population—who at this very moment are denied the greater part of what the very lowest standards of today call the necessities of life.

I see millions of families trying to live on incomes so meager that the pall of family disaster hangs over them day by day.

I see millions whose daily lives in city and on farm continue under conditions labeled indecent by a so-called polite society half a century ago.

I see millions denied education, recreation, and the opportunity to better their lot and the lot of their children.

I see millions lacking the means to buy the products of farm and factory and by their poverty denying work and productiveness to many other millions.

I see one-third of a nation ill-housed, ill-clad, ill-nourished.

But it is not in despair that I paint you that picture. I paint it for you in hope—because the nation, seeing and understanding the injustice in it, proposes to paint it out. We are determined to make every American citizen the subject of his country’s interest and concern; and we will never regard any faithful law-abiding group within our borders as superfluous. The test of our progress is not whether we add more to the abundance of those who have much; it is whether we provide enough for those who have too little."

SOLID GONE. El Cabrero is still playing hookie, so there are no links or comments about current events. This post was scheduled in advance and won't reflect breaking news.

The books of human fortitude 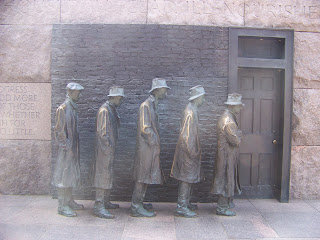 "An old English judge once said: "Necessitous men are not free men." Liberty requires opportunity to make a living—a living decent according to the standard of the time, a living which gives man not only enough to live by, but something to live for.

We are poor indeed if this Nation cannot afford to lift from every recess of American life the dread fear of the unemployed that they are not needed in the world. We cannot afford to accumulate a deficit in the books of human fortitude.

In the place of the palace of privilege we seek to build a temple out of faith and hope and charity.

It is a sobering thing, my friends, to be a servant of this great cause. We try in our daily work to remember that the cause belongs not to us, but to the people. The standard is not in the hands of you and me alone. It is carried by America. We seek daily to profit from experience, to learn to do better as our task proceeds.

Governments can err, Presidents do make mistakes, but the immortal Dante tells us that divine justice weighs the sins of the cold-blooded and the sins of the warm-hearted in different scales.

STILL GONE. El Cabrero is hiding out at an undisclosed location this week so there will be no links and comments. This post was scheduled in advance and won't reflect breaking news. Well may the world go. 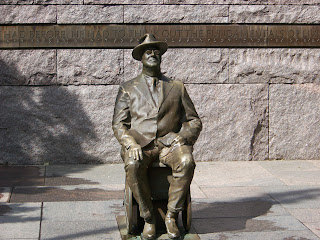 “The money changers have fled from their high seats in the temple of our civilization. We may now restore that temple to the ancient truths. The measure of the restoration lies in the extent to which we apply social values more noble than mere monetary profit.

Happiness lies not in the mere possession of money; it lies in the joy of achievement, in the thrill of creative effort. The joy and moral stimulation of work no longer must be forgotten in the mad chase of evanescent profits. These dark days will be worth all they cost us if they teach us that our true destiny is not to be ministered unto but to minister to ourselves and to our fellow men.

Recognition of the falsity of material wealth as the standard of success goes hand in hand with the abandonment of the false belief that public office and high political position are to be valued only by the standards of pride of place and personal profit; and there must be an end to a conduct in banking and in business which too often has given to a sacred trust the likeness of callous and selfish wrongdoing. Small wonder that confidence languishes, for it thrives only on honesty, on honor, on the sacredness of obligations, on faithful protection, on unselfish performance; without them it cannot live."--Franklin Delano Roosevelt, First Inaugural Address, March 4, 1933

OFF THE GRID. El Cabrero is taking this week off so there will be no links and comments. Posts were scheduled in advance and won't reflect any breaking news.

Nothing to fear but fear itself 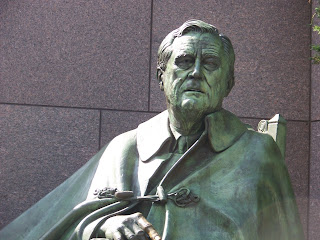 The week before last, I visited Washington along with hundreds of fellow West Virginians and thousands of people around the country to rampage around about health care reform.

We rolled in at about 8 in the morning and had some free time, so three of us decided to walk over to the FDR Memorial. We were unaware at the time of the distance between Union Station and FDR. It turned out to be a few miles away, but it was a pilgrimage after all.

I have often referred here to my lifelong fascination with President Roosevelt and the New Deal. My parents grew up in the Depression and were ardent New Deal supporters. And New Deal programs built much of the infrastructure of my state. Growing up, it was less risky for me to make a sacrilegious joke than to dis the Roosevelts.

Recently, I've gone on another FDR reading jag, including Jerry Bruce Thomas' An Appalachian New Deal: West Virginia in the Great Depression and Jean Edward Smith's FDR. Thomas grew up in southern WV and Smith is a history professor at El Cabrero's alma mater Marshall University. I'm in the middle of a bio of Frances Perkins.

Over the next few days, I'm going to be posting on related topics.

NO LINKS THIS WEEK. El Cabrero is taking a week off. There will be regular posts this week but no links.