How did I miss this?


How is it that after a lifetime of being interested in snakes and other critters I am only now hearing about Asian flying snakes?

I wish we had some of these in West Virginia. And, by the way, the Pentagon has been studying them for possible military applications.

Heads up!
by El Cabrero No comments:

Of reproaches to chastity and such matters 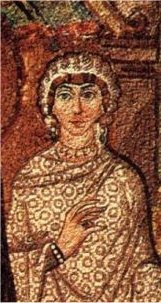 Speaking of reading jags, a year or so ago, some friends inspired me to read the unabridged version of Gibbon's Decline and Fall of the Roman Empire. Don't ask me why since my only recourse would be to say "Because it's there."

Rather than a direct assault, I only try to read enough to turn the pages twice most days and then take a break when I finish a volume. At this point in my progress, the Western Empire has fallen into barbarian hands whilst the Emperor Justinian is trying to win it back.

One reason for reading is that there is something cool about 18th century English prose, not to mention that fact that his vast amount of research holds up pretty well. The real payoff, however, is to be found in the little zingers in which he treats of scandalous matters.

Here's a passage describing the marriage of the great general Belisarius and his amorously adventurous wife Antonina:

The birth of Antonina was ignoble; she descended from a family of charioteers; and her chastity has been stained with the foulest reproach. Yet she reigned with long and absolute power over the mind of her illustrious husband; and if Antonina disdained the merit of conjugal fidelity, she expressed a manly friendship to Belisarius, whom she accompanied with undaunted resolution in all the hardships and dangers of a military life.

Nobody, chaste or otherwise, writes like that any more.

TALKING SENSE. Here's an interview with a progressive deficit hawk.

UNEMPLOYMENT. Here's a good article from the Charleston Gazette about what extending unemployment insurance means to West Virginia (and other places too). And here's more on the subject from the WV News Service. And here's a call for the same from the White House Council of Economic Advisers. It may be part of an eventual deal on Bush-era tax cuts before it's all over with. Or not.

THE SPINE THING. Paul Krugman is not amused.

CHINA AND COAL. Here's an interesting look from The World.

SOME GOOD WV NEWS. West Virginia revenues are $121 million in the black while many other states are facing major shortfalls.

I wouldn't recommend carrying a copy of Nietzsche whilst deer hunting to everyone, but it works for me. The deer weren't in the neighborhood at the time anyway so the book was good company.

Nietzsche is sometimes called a nihilist, but that is far from the truth. His main quarrel with many kinds of religion and philosophical idealism was that they were nihilistic to his way of thinking in that they sought for some other reality beyond the one we live in.

One theme of his that shows up again and again is the challenge to say "yes" to life in spite of all its nastiness, or, to put it another way, to try to live in such a way that we can and want to say yes to the whole package. Here's how he expresses it in terms of a New Year's resolution:

I want to learn more and more to see as beautiful what is necessary in things; then I shall be one of those who make things beautiful. Amor fati [love of fate]: let that be my love henceforth! I do not want to wage war against what is ugly. I do not want to accuse; I do not even want to accuse those who accuse. Looking away shall be my only negation. And all in all and on the whole, some day I wish to be only a Yes-sayer.

DENIED. A move to extend emergency unemployment insurance failed in the Senate. But the banks are doing fine.

HIGHLIGHTING HISTORY. A new map and poster highlight black history in West Virginia and the many ways events here have shaped the nation.

THE MEANING OF LIFE. Some people do just fine without worrying about it.

ANIMAL EXTINCTIONS are bad for your health.

AT LEAST THERE'S NO SHORTAGE of stars. 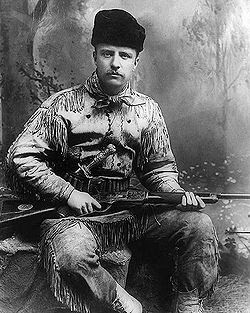 Teddy Roosevelt on the hunt. He probably didn't read Nietzsche.

I am not one to seek adversity other than on a recreational basis. Given a choice, I'd prefer to avoid it or at least minimize it. Of course, we don't always have a choice.

Sometimes though, it seems like we need a bit of it to bring out some good qualities that may otherwise have never surfaced. I came across this little nugget on that subject by Nietzsche whilst unsuccessfully hunting deer last week (everybody reads Nietzsche when deer hunting, right?):

Evil.-Examine the lives of the best and most fruitful people and peoples and ask yourselves whether a tree that is supposed to grow to a proud height can dispense with bad weather and storms; whether misfortune and external resistance, some kinds of hatred, jealousy, stubbornness, mistrust, hardness, avarice, and violence do not belong among the favorable conditions without which any great growth even of virtue is scarcely possible. The poison of which weaker natures perish strengthens the strong--nor do they call it poison.

NOT ON THE COVER OF THE ROLLING STONE, but in the middle of the latest issue of the magazine is a profile of Massey Energy CEO Don Blankenship. The whole thing isn't available online, but here's a start from Ken Ward's Coal Tattoo. I ran out and bought one yesterday. You heard the Tolkien analogy first here though.

TAXING ISSUES. When it comes to promoting a healthy state economy, things like education, health and infrastructure matter more than tax cuts, according to one expert who has studied the evidence.

MEANWHILE, BACK IN CONGRESS, Robert Reich argues here that the time is now to end Bush era tax cuts for the wealthiest Americans.

DON'T GET MAD, get lemonade.

Deer season in West Virginia came in last week. While I'm not exactly on the hunting varsity team, I did spend a bit of time in the woods.

Even though no deer came my way, I find there's a lot to be said for sitting quietly in the woods and just watching and listening. In my case, there were plenty of squirrels raising hell and lots of woodpecker action.

I also used the time on the hill to re-read another book of my old pal Nietzsche, The Gay Science, sometimes also known as The Joyful Wisdom. If someone asked what the book was about, I'd be hard pressed to answer except to say "all kinds of things."

Nietzsche is the master of the one liner or short epigram. Here are a few that caught my eye this time around:

After a great victory.--What is best about a great victory is that it liberates the victor from the fear of defeat. "Why not be defeated some time, too?" he says to himself; "Now I am rich enough for that.

Always in our company.--Whatever in nature and in history is of my own kind, speaks to me, spurs me on, and comforts me; the rest I do not hear or forget right away. We are always only in our own company.

Against many a defense.--The most perfidious way of harming a cause consists of defending it deliberately with faulty arguments.

Dreams.--Either we have no dreams or our dreams are interesting. We should learn to arrange our waking life in the same way: nothing or interesting.

A BETTER WAY. The Economic Policy Institute, Demos, and The Century Foundation have come up with an alternative for dealing with deficits and the recession.

GOT SPINE? Here's a call for progressive backbone in the deficit debate. 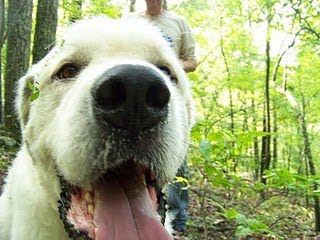 It's always a good thing on returning from a road trip to wind up with approximately the same number of domestic animals as were there when one departed. I'm happy to day that happened again. All the goats, peafowl, cats and turkeys are present and accounted for.

I'm also glad to report that Arpad (above) was there when we got back and apparently didn't eat anybody important while we were gone.

Every time I go back and forth from Vermont to West Virginia, I think about that hard-hitting work of social realism, The Lord of the Rings. As I've said before, the mountain state to the north reminds me of the Shire, whereas the one to the south is more like a threatened and embattled land on the edge of Mordor where the Dark Lord strives for absolute mastery.

SPEAKING OF WHICH, here's an interesting item from last week about Massey Energy.

SOS. Here's an op-ed by yours truly on the need for Congress to act to extend unemployment insurance.

DITTO. This editorial from Sunday's NY Times also highlights the need to help the unemployed--and urges political leaders to show a little backbone.

DEFICIT COMMISSION. Progressive groups are going to unveil non-draconian approaches to dealing with the deficit this week.

CATS AND DOGS. The latter may have bigger brains because they are more social.