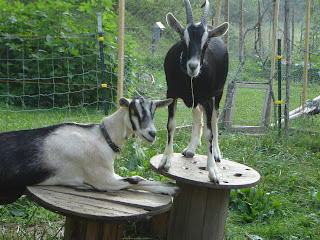 Caption: These guys are rebels.

Some of the wisest words ever were carved on the ancient Greek temple of Apollo at Delphi: "Nothing in excess" and "Know thyself."

(Unfortunately, the ancient Greeks weren't always that great at taking the advice...me neither come to think of it.)

The French philosopher Albert Camus, who is on the menu at Goat Rope this week, managed to do something pretty rare: combine rebellion with moderation.

Rebellion is the subject of his book The Rebel (so it isn't just a clever name). For Camus, rebellion springs from the urge for justice and freedom. It involves saying No to oppression, servitude, or degradation.

But rebellion itself must have its limits. All too easily it can and has mutated into fanaticism, totalitarianism, nihilism and terrorism:

Moderation is not the opposite of rebellion. Rebellion is in itself moderation, and it demands, defends, and re-creates it throughout history and its eternal disturbances.

He believed that it is not given to us to remake the world from scratch or to fundamentally change the human condition with all its inevitable tragedies and absurdities:

Man can master in himself everything that should be mastered. He should rectify in creation everything that can be rectified. And after he has done so, children will still die unjustly even in a perfect society. Even by his greatest effort man can only propose to diminish arithmetically the sufferings of the world. But the injustice and the suffering of the world will remain, and no matter how limited they are, they will not cease to be an outrage. Dimitri Karamazov's cry of "Why" will continue to resound; art and rebellion will die only with the last man.

But he argued that we can, here and there, with luck and skill and fortitude make improvements, end abuses, and reduce unnecessary suffering:

Him did talk pretty too.

CHIP SHOWDOWN. Congress could vote today on expanding the Childrens Health Insurance Program. President Bush has threatened a veto. Here's a good critique of Bush's position from the Center on Budget and Policy Priorities and here's the latest from the NY Times.

El Cabrero and amigos will have a press conference in support of CHIP this afternoon. It'll show up here (assuming we get any press) tomorrow. That will be today's moderate rebellion.

DIRTY TRICKS DEPARTMENT. Here's an item on the art and science of union busting and one more reason why we need the Employee Free Choice Act.

WHAT HE SAID. WV Senator Robert C. Byrd on Iraq:

The best way to support our troops is to bring them home, and the only way to get them home may be to somehow restrict the funds for this disastrous war. ... This senator will support no more blank checks for Iraq.

BEST OF LUCK to the GM United Auto Workers members in getting a decent contract. El Cabrero is a member of that branch of the UAW that doesn't know how to change the oil.