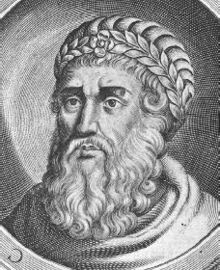 Lately the theme at Goat Rope is Shakespeare's Hamlet, but you'll also find links and comments about current events.

As I mentioned in yesterday's post, the Elizabethan theater was a direct descendant of the miracle and mystery plays of the Middle Ages. These were examples of art-from-below and featured amateurs performing about biblical themes. In these plays, there were often stock characters as well as stock villains, which helps explain on odd expression from Hamlet.

In Act 3, there is an amusing scene in which [an actor playing] Hamlet gives acting instructions to [an actor playing] the First Player of the theater troupe that showed up in Elsinore who are about to present the play-within-the-play.

Speak the speech, I pray you, as I pronounced it to
you, trippingly on the tongue: but if you mouth it,
as many of our players do, I had as lief the town-crier
spoke my lines. Nor do not saw the air too much with
your hand, thus, but use all gently; for in the very
torrent, tempest, and, as I may say, the whirlwind of
passion, you must acquire and beget a temperance
that may give it smoothness. O, it offends me to the
soul to hear a robustious periwig-pated fellow tear
a passion to tatters, to very rags, to split the ears of the
groundlings, who for the most part are capable of
nothing but inexplicable dumbshows and noise: I would
have such a fellow whipped for o'erdoing Termagant;
it out-herods Herod: pray you, avoid it.

(The term Termagant, by the way, in medieval European folklore was a deity that some erroneously supposed Muslims to worship. By the Renaissance, it came to mean a bully or even a "shrewish" woman.)

In the medieval miracle plays, the Herod family provided two great stock villains, Herod the Great (circa 74-4 BC) and his son Herod Antipas (circa 20 BC-39 AD). The former, according to the Gospel of Matthew, was the ruler of Judea who ordered the slaughter of the innocents after hearing of the birth of the Messiah.

The synoptic gospels portray Antipas as the one who arrested John the Baptist and was tricked into a promise that involved serving up John's head on a platter. In Luke's Gospel, Pilate sent Jesus to Antipas after his arrest. According to Luke 23:

When Herod saw Jesus, he was exceedingly pleased, for he had been wanting to see him for a long time, having heard a great deal about him; and he was hoping to see some sign given by him. So he questioned him at some length, but Jesus made no reply.

Meanwhile the chief priests and the teachers of the law stood by and vehemently accused him. And Herod, with his soldiers, treated Jesus with scorn; he mocked him by throwing a gorgeous robe round him, and then sent him back to Pilate.

Anyhow, medieval actors who got to play either Herod tended to really ham it up. That is part of the fun of playing a bad guy after all. That tradition survived well into the 20th century, as is shown by King Herod's Song in the rock opera Jesus Christ Superstar.

AND LOSE THE NAME OF ACTION? Health care reform is no longer a "rush" item in the US Congress.

MORE ON THAT from E.J. Dionne here.

UNEMPLOYMENT would have been much worse--1.2 million jobs worse--without the American Recovery and Reinvestment Act, according to a USA Today survey of economists, but most agree more needs to be done.

MOUNTAINTOP REMOVAL. Here's a link to the Science magazine article about the effects of this kind of mining.

MEANWHILE, BACK AT THE WV CAPITOL, the rush is on to pledge allegiance to coal and oppose climate change legislation.

Prove to me that you're divine, change my water into wine.

That's all you need do and I'll know it's all true.

C'mon king of the Jews.

How can you not ham it up to something like that?