A BIRTHDAY, A MINIMUM WAGE UPDATE, AND IRAQ IDEAS 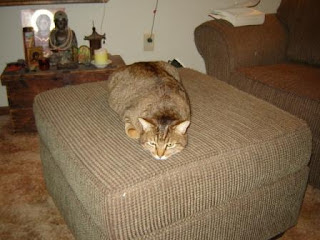 Caption: Seamus McGoogle, having invoked the saints and taken refuge in the Buddha, prepares for the final push on the minimum wage
GOAT ROPE BIRTHDAY. It has come to my attention that this past Saturday, Feb.17, marked the first birthday of this blog.
El Cabrero would like to thank Goat Rope subscribers and readers as well as his employer, the American Friends Service Committee, which allow it to happen.

Ordinarily AFSC strives for a degree of respectability, at least outside of El Cabrero's beloved state of West Virginia, but they've let me and the talking animals here away with quite a bit.
(I think that's because they don't read it. )
Now for some updates:
A STEP CLOSER FOR THE MINIMUM WAGE. The U.S. House passed a $1.8 billion package of tax breaks for business as a step towards a compromise with the Senate on raising the minimum wage.
Earlier, the House passed a clean minimum wage increase, but the Senate tied it to $8.3 billion in business tax cuts. This may make it easier for both houses to reconcile differences and (finally) raise the minimum after 10 years of stagnation.
Senate Finance Chair Max Baucus predicted the bills would reconcile within two or three weeks.
For a good critique of the Senate tax cuts, check this "Outside Shot" article from Business Week by Economic Policy Institute economist Max B. Sawicky, who argues that "these tax cuts would never stand alone, so they ought not stand at all."

IRAQ. While the Senate failed this weekend to vote on the Iraq resolution that passed the House, the WV House of Delegates will take up a similar one this week. A press conference in support is planned for this afternoon.

And it looks like there was a little excitement at Congresswoman Shelley Moore Capito's office Friday after she became the only member of WV's delegation to oppose the anti-"surge" resolution. First there was a vigil outside the office. Later that evening, the Rev. Jim Lewis, a leader of WV Patriots for Peace was eventually escorted out by police and issued a citation for, shall we say, making an extended visit.

Speaking of Jim, if you haven't already, check out his musings in Fig Tree Notes. They are always worth a look.

I note that the world goes on at its normal pace regardless of our blogs. Perhaps I am being too pessimistic?

Happy Birthday to You and all the Talking Animals. The ENTIRE TEAM is doing a great job!

A big thank you from the animals and me to both of you!

Re: the effect of blogging...I look at it as a big toolkit. I throw all kinds of stuff into it so I can retrieve it when there's a chance to work on the issues.

Plus, it keeps us off the streets, right?

Whoops, almost missed your anniversary ~ keep up the great work, and hope to see you soon!

Gracias, prima! Re doing taxes...I hate it when that happens

Happy Blogiversary to you and the whole menagerie!