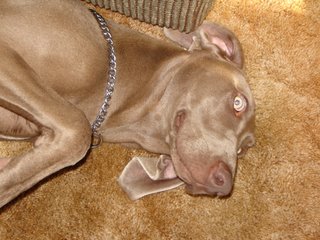 Be sure to check out Dr. Ringworm's previous contributions from the last three weekends (on post-modernism, deconstructionism, and semiotics respectively) in the Goat Rope Archives.

This is part of our continuing efforts to elevate the level of popular discourse and stimulate animal-led discussions of literary and intellectual trends.

OK, like structuralism is another weird French thing. I think it came from these two dead French guys. One, Saussure, was into languages and the other Levi-Strauss, was a strange anthropologist guy.

But you know, if it wasn't for weird dead French guys, literary theorists like me wouldn't have anything to write about. Even if they didn't write about anything important, like squeaky toys or things you can eat, chase, or pee on.

So structuralism is kind of like semiotics where nothing means anything by itself but only in connection to everything in a system, like letters in the alphabet.

And like they think people are hardwired to make up these systems to fit everything in to. And the systems people make up because they're hardwired to only make sense from the inside, not the outside. But everybody does and can't help it.

And like one thing people do a lot if is come up with these binary system thingies that they try to make everything or everyone fit in. Like good/bad, raw/cooked, and so on.

Have you ever noticed that there are two kinds of people--the ones who use binary classification systems and those who don't?

All of which kind of shows that dogs are much more complicated than people. We use way more than two categories we divide things into. I think it's like five or six. Like there are things you can eat, chase, smell, pee on, play with, and roll around in. I was spayed when I was little but I think there may be one more category too.

BY THE NUMBERS: POVERTY, INCOME AND HEALTH CARE--AND A COOL NEW SPIDER 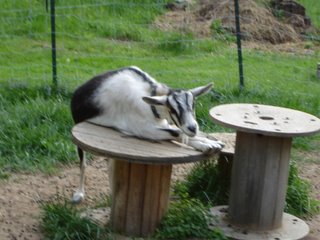 Although Poverty Day hasn't yet become an official holiday, it does occur with regularity at the end of August and is eagerly awaited by more people than you might imagine.

In fact, looking forward to it is one of the leading symptoms of becoming a policy wonk.

Poverty Day is what some people call the annual release by the Census Bureau of a report on Income, Poverty and Health Insurance in the United States.

Lots of groups try to get out a press release or statement regarding the findings as soon as the information is released, but El Cabrero prefers a more patient, measured response (translation: I'm just getting around to it).

*The number of Americans living in poverty--37 million--hasn't changed from last year, despite several years of economic "recovery." In 2005, 12.6 percent of Americans lived below the official poverty rate, higher than 11.7 percent in 2001.

*Poverty itself is changing for the worse. According to the Center on Budget and Policy Priorities, "The amount by which the average poor person fell below the poverty line in 2005--$3,236--was the highest on record." Fully 43 percent of poor people fell below half of the poverty line.

Clearly the numbers show the need for policy changes. Some basic--and immediate--steps should include raising the minimum wage and expanding the earned income tax credit for working families.

Restoring fiscal sanity to the federal budget process wouldn't hurt either, meaning that programs like Medicaid are a little more important right now than giving more tax cuts to the wealthiest.

This one may take a little longer, but how's that universal health care coming?

AND NOW FOR SOMETHING COMPLETELY DIFFERENT

El Cabrero respectfully requests that readers of this blog NOT inform his spousal unit lest this creature be added to the growing menagerie. Not that there's anything wrong with being eight-legged and able to squirt web--it's just that WV winters probably wouldn't agree with the new addition.

THE CHANGING FACE OF WORK 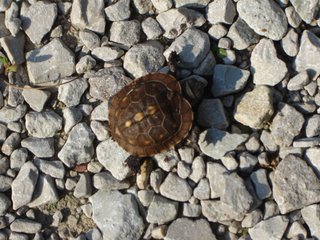 Caption: This baby turtle should consider a career in health care. And stay off the roads.

The face of work continues to change in the US. According to the Economic Policy Institute, only 14.2 million Americans now work in manufacturing, down by 3.4 million from the last manufacturing peak year (1998).

A big part of this decline can be traced to the record US trade deficit, which is now at 6 percent of GDP. Real wages for factory workers declined 2.7 percent over the last year, although productivity has increased.

Meanwhile, Business Week reported in the Sept. 25 issue that the real growth engine for the national economy has been health care, which added 1.7 million jobs since 2001:

Almost invisibly, health care has become the main American job program for the 21st century, replacing, at least for the moment, all the other industries that are vanishing from the landscape. With more than $2 trillion in spending--half public, half private--health care is propping up local job markets in the Northeast, Midwest, and South, the regions hit hardest by globalization and the collapse of manufacturing.

If current trends continue, health care will account for 30 to 40 percent of new jobs created in the next 25 years.

While El Cabrero is all in favor of jobs, overdependence on this sector is not a sign of a robust and varied economy. The problem is not that the health care sector is growing (it is pretty important after all) but that other sectors such as manufacturing aren't.

These issues are related. The lack of a universal health care system in the U.S. is harming the ability of domestic manufacturers to compete with companies in countries that have one.

At some point, the related issues of health care and the decline in manufacturing will have to be dealt with at the policy level. 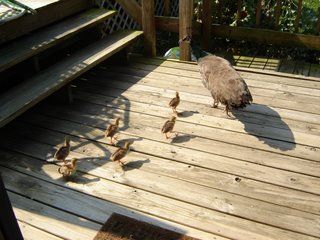 Caption: These little guys have good leadership. Why can't we?

Goat Rope interrupts its regularly scheduled programming of rants about the present to share two quotes from former presidents.

...the mass of mankind has not been born with saddles on their backs, nor a favored few booted and spurred, ready to ride them legitimately, by the grace of God.

OK. Now back to the present. Tomorrow's Goat Rope is going to be about health care and the economy. Here is a link to an interesting article in today's New York Times that goes against the grain.

Usually, people complain about the growing cost of health care (for good reason). The author here seems to be reminding us that, on the proverbial other hand, health care is kind of important and that spending lots of money so that people can have longer and fuller lives doesn't necessarily compare unfavorably with spending money at the mall. 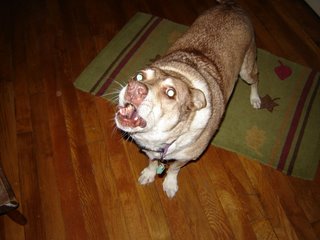 Caption: Lily is pretty upset about this.

The widening income gap in the U.S. is a frequent topic of Goat Rope rants. The war in Iraq is sadly revealing a different kind of income gap. As CBS News reports

Among the Americans killed in the Iraq war, 34 percent have come from communities reporting the lowest levels of family income. Half come from middle income communities and only 17 percent from the highest income level.

That's a change from World War II, when all income groups were represented about equally. In Korea, Vietnam and Iraq, the poor have made up a progressively larger share of casualties, by this analysis.

While low income Americans have been fighting and dying in Iraq, the Bush administration has lavished its attention on cutting taxes for the very wealthy and slashing the budgets of social programs like Medicaid and student aid that benefit the families and communities the soldiers come from. 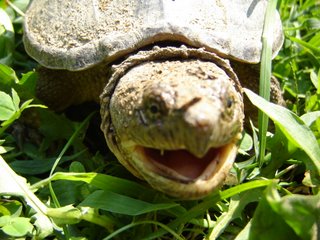 Caption: This guy can ask some tough questions.

Key Senate leaders have been busy coming with a torture "compromise" that will allow the Bush administration to do whatever it wants to do to whoever it wants to.

(...Which is probably unnecessary, since the administration has a long history of ignoring legislation it doesn't like...)

In that kind of political climate, the words of Lieutenant General John Kimmons, Army deputy chief of staff for intelligence, are a welcome change. At a briefing for reporters on the Army's new field manual, he had this to say:

No good intelligence is going to come from abusive practices. I think history tells us that. I think the empirical evidence of the last five years, hard years, tells us that. And, moreover, any piece of intelligence which is obtained under duress, through the use of abusive techniques, would be of questionable credibility, and additionally it would do more harm than good when it inevitably became known that abusive practices were used. And we can't afford to go there...

Maybe the administration should try listening to some of the troops they're always telling us to support.

In a related development, The New York Times reports that a recent intelligence assessment "found that the Iraq war has invigorated Islamic radicalism and worsened the global terrorist threat..."

That was another shocker...