This blog has been irregular lately due to a death in the family but will resume its regular, six day a week schedule this weekend. Thanks again for your patience.
by El Cabrero 1 comment: 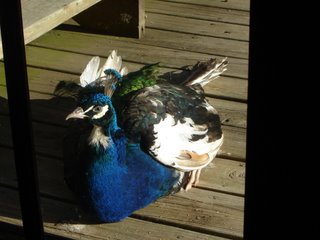 You know you are on your way to policy wonkhood when you start waiting anxiously for the annual release of census data.

The end of August means, among other things, the release of the report on poverty, income and health insurance status.

Of these, health care is likely to be a growing focus of public debate. To get an idea of the dimensions of the nation's health care crisis, sometimes a little social math can help turn numbers into a more concrete image.

In his 2003 book The Two Percent Solution, Matthew Miller made it very clear:

(That was the total population of 23 states.)

Unfortunately, this example came from The Good Old Days of a few years ago when only 42 million Americans lacked health care. According to the new data, the number of uninsured Americans increased from 45.3 to 46.6 million. The geographically inclined might be able to fit a few more states into that.

The number of Americans covered by private and work-related plans also declined.

As Goat Rope has often ranted, an estimated 18,000 Americans die prematurely each year due to lack of health care coverage while the US spends more of its GDP on health care and gets less from it than any other industrialized country. And the cost of providing uncompensated care to those without health care coverage (often too little and too late) drives up costs for everyone else.

The only rational solution is to move to some form of universal coverage. But if that is going to get on the national agenda, people are going to have to put it there. 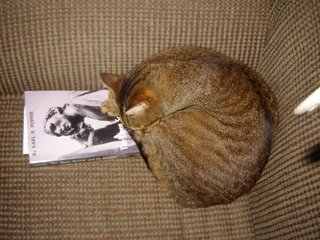 Caption: Literary and philosophical studies can be exhausting. Seamus McGoogle was keeled over by Karl Popper, who wasn't even a French existentialist.

In addition to dealing with death and the culture shock of being a hick in Manhattan for a few days, El Cabrero has been grappling with another shock: the French (Freedom?) writer Albert Camus recently made it to the (very) Short List of President Bush’s reading material.

Camus was an Algerian-born novelist, philosopher, playwright, member of the French Resistance, essayist, journalist, activist and pretty much all around good guy.

The fact that Bush read even a little of his work may well be the best news we’ve heard from this quarter in the last five years. Alas, while Camus’ writings generally lack miraculous powers, I’d be real surprised if anyone came out the worse for reading them.

At least it couldn’t hurt.

According to The New Republic, White House Press Secretary Tony Snow said “He found it an interesting book and a quick read.”

The word on the street is that the even president discussed existentialism with Snow.

I would have paid cash money to be a fly on that wall.

Camus ranks prominently on El Cabrero’s list of Writers Whose Work Probably Made Me a Little Bit Less of a Jerk Than I Might Otherwise Have Been. The first encounter occurred in the stacks of the hometown public library and involved his classic essay opposing capital punishment, “Reflections on the Guillotine,” which was one that has stuck with me over the years.

(Snarky comment: too bad a certain person didn’t read this and maybe Neither Victims nor Executioners during his term as governor.)

While The Stranger is no doubt Camus’ best know work of fiction, I would have felt a little better if the president had read The Plague instead.

The take home message from that book can be found in a statement by the character Tarrou:

All I maintain is that on this earth there are pestilences and there are victims, and it’s up to us, so far as possible, not to join forces with the pestilences.

Probably the greatest thing about Camus was his realization that one of the few things distributed fairly throughout the world is the tendency of people to act unjustly to others given the chance. He alienated both the left and the right by speaking out for human rights regardless of where the abuses came from.

He opposed both reactionary conservatism and bloodthirsty utopianism. A realist, he believed we had to try to fight against the evils of the world without adding to them, no easy task. He called for both rebellion and holy moderation, which he viewed as one and the same.

This may be a bit much to wish for these days, but it would have been nice if the president and other national leaders had scanned the nonfiction work The Rebel as well, where Camus developed many of these ideas. Sample quote:

We all carry within us our places of exile, our crimes and our ravages. But our task is not to unleash them on the world; it is to fight them in ourselves and in others. 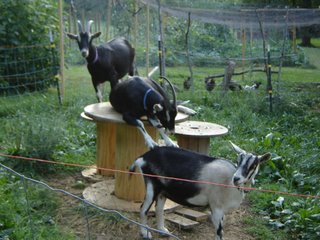 This Goat Rope post comes to you from The City that Never Sleeps, a trait it shares in common with El Cabrero. Manhattan is OK, but I can't figure out where people keep their goats, chickens and peacocks...

The occasion for the trip was the death of El Cabrero's brother, John Wilson, who worked as assistant to the science editor at the New York Times. Here's his Times obituary.


Many thanks to all who have sent condolences at this difficult time. Goat Rope will attempt to resume regular posts today.

(Note: while the Times is no Goat Rope--and such comparisons are so unfair--it does appear to be a pretty decent paper. They do they best they can with what they have, although they seem to suffer from an acute shortage of gratuitous animal pictures.)

Meanwhile, back at the class war, a headline in the obscure periodical mentioned above reports something most working people figured out a while back: "Real Wages fail to Match a Rise in Productivity."

The median hourly wage for American workers has declined 2 percent since 2003, after factoring in inflation. The drop has been especially notable, economists say, because productivity--the amount that an average worker produces in an hour and the basic wellspring of a nation's living standards--has risen steadily over the same period.

As a result, wages and salaries now make up the lowest share of the nation's gross domestic product since the government began recording the data in 1947, while corporate profits have climbed to their highest share since the 1960's. UBS, the investment bank, recently described the current period as "the golden era of profitability."

Until the last year, stagnating wages were somewhat offset by the rising value of benefits, especially health insurance, which caused overall compensation for most Americans to continue increasing. Since last summer, however, the value of workers' benefits has also failed to keep pace with inflation, according to government data.

All of this is another clear indication that the country is headed in the wrong direction. This Saturday in the capitol of El Cabrero's beloved state of West Virginia, hundreds came together in an effort to move the country in a better direction. Here is coverage from the Sunday Gazette-Mail and the Head On Radio Network.

There were actually two events that day. The first was a rally and parade by West Virginians United, a diverse coalition of groups and individuals concerned with social and economic justice, peace, the environment, and the future of democracy. The second was a labor rally sponsored by the WV AFL-CIO, also a key member of West Virignians United. It sounds like a good time was had by all.

El Cabrero's brother would have approved.

To quote from the legendary labor organizer Mother (Mary Harris) Jones: "Pray for the dead and fight like hell for the living..."