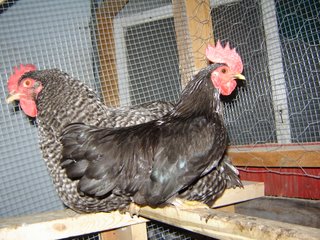 This feature is part of our ongoing efforts to provide fair and balanced coverage of the issues of the day and to promote a free exchange of opinions in a climate of civility and mutual respect.

Holy crud! This blog is getting stupider and stupider. I've eaten worms with more brains than this. Did you guys like go to school to be this dumb or what?

OK. Listen to me. That thing yesterday about taxes? The one with the picture of the peacock?
Let me tell you about taxes. It's like this:

OK . There are only so many things to go around. Like in the picture. The little handsome guy is me. Pretty sharp, huh? Thanks for noticing. You see what's beside me? That's right. I'm talking one BIG hen. Yeah man. There's only one of those around here and she's with me. Got it?

That's what the free market is all about. It's about rewarding the best. Like me. You think I'm gonna pay taxes on that? Come and get em, Jack!

TAXES: WHOSE GOOSE IS PLUCKED? 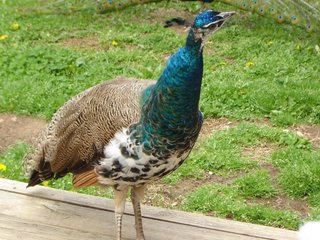 Caption: It has been said that “the art of taxation consists in so plucking the goose as to get the most feathers with the least hissing.” Castor is no goose, but says “Can we please change the subject?”

In the last few weeks, millions of Americans rushed to submit income tax returns before the April 17 deadline.

Taxation is can be an interesting subject. Well, sort of, anyway. Here are a few facts about the current state of taxes in the US.

According to the Center on Budget and Policy Priorities,

*federal revenues as a percentage of the economy were smaller in 2005 than their average level of the 1960s through the 1990s. The main reason for this has been the Bush administration’s ceaseless wave of tax cuts aimed mostly at the rich since 2001, which also blew a federal surplus and created record deficits.

*revenues are also lost due to tax evasion, which is mostly a white collar, upper income crime. In 2001, the most recent year for which we have data, nearly $300 billion in taxes went unpaid. “To subsidize those who do not pay the taxes they owe,” CBPP reports, “other taxpayers must pay about 17 percent more in taxes.”

[El Cabrero has long found it ironic that people go ballistic about welfare fraud, which occurs in less than one percent of welfare claims and is tiny in comparison with tax evasion, where an estimated 10 percent of taxes owed mostly by the wealthy are never collected.]

*people making over $1 million per year were $100,000 better off due to tax cuts enacted in 2001 and 2003. The value of the tax break is more than twice the annual income of the typical US household.

*social services have been slashed by Congress and the Bush administration supposedly to reduce the deficit, but “the President’s tax cuts for people who make over $1 million a year would cost more than the total savings from all of the proposed cuts in domestic discretionary programs, including the cuts proposed in education, environmental protection, veterans’ medical care, and medical research.

The National Priorities Project cites statistics from the Office of Management and Budget that show that the share of income taxes paid by corporations has drastically declined since the 1950s. In 1955, corporate income taxes made up 27 percent of federal revenues; in 2005, they were only 11 percent.

Methinks the wrong gooses are being plucked.

A WORK ETHIC WITHOUT A WAGE ETHIC 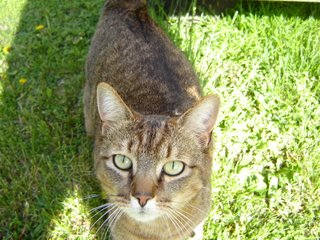 According to the April 24 Business Week, “American workers have upped their contribution to their companies’ revenues and profits at a faster clip than their European counterparts” and take fewer sick days.

Unfortunately for those US workers, wages, stagnant for years, have not kept up with profits or with their contributions to the success of their employers.

According to the US Department of Labor Wage and Hour Division, “As the productivity of workers increases, one would expect compensation to experience similar gains.” Too bad it doesn’t work that way these days.

Holly Sklar, author with the Rev. Dr. Paul Sherry of A Just Minimum Wage: Good for Workers, Business and Our Future, wrote that “Between 1973 and 2004, worker productivity rose 78 percent, but the real minimum wage fell 24 percent. For average workers (production and nonsupervisory workers, about 80 percent of the employed private workforce, hourly wages fell 11 percent, adjusting for inflation.”

The result, she suggests, is a work ethic without a wage ethic.

While a minimum wage worker working 40 hours per week would earn $10,712, the May 1 Nation reports that the CEO of Wal-Mart “earns” around $3,500 per hour. The poor guy…the Halliburton CEO was said to bring home about $8,300 an hour, while the ExxonMobile CEO was said to earn around $13,700 per hour.

Nice gigs if you can get them.

BUSH HEALTH PLAN A GOAT ROPE IN THE MAKING 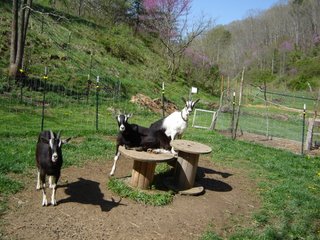 The Bush administration’s explanation of the US health care crisis would be hilarious if they were only joking.

At a time when 46 million Americans lack health coverage, a number that has grown each year since 2000, and many more have negligible or unaffordable coverage, the administration has the guts to suggest that the problem is that too many of us have too much health care and don’t pay enough for it.

Presidential assistant Allan B. Hubbard wrote, apparently with a straight face, in the New York Times that “Health care is expensive because the vast majority of Americans consume it as if it were free. Health insurance policies with low deductibles insulate people from the cost of the medical care they use—so much so that they often do not even ask for prices.”

Most people who live in our solar system see it a little bit differently. If anything, it works the other way. People without health insurance tend to delay care until their condition becomes much more serious—and expensive—to treat.

To use El Cabrero’s beloved state of West Virginia as an example, the state Health Care Authority found in 2004 that hospitals here provided $447 million in uncompensated care, mostly to the uninsured. This merely shifts costs to people who are insured. Families USA estimates that the cost of family coverage in this state is almost $1,800 per year higher due to the cost shift. They estimate that this will increase to over $2,900 by 2010.

For that matter, since health care is kind of important, and since demand is growing and technology is constantly changing, we should expect it to be expensive, cost shifts aside.

But here as elsewhere, the administration lives in a land of (bad) theology rather than reality, the deity in question being the market god. Health Savings Accounts, their silver bullet, would empower “consumers”—whatever happened to sick people?—to shop for health care the way they shop for tomatoes. Too bad health care isn’t a simple commodity.

In fact, health care isn’t exactly the market god’s strong suit. The US pays more in health care as a percentage of GDP than any other developed nation and gets less in return. This is due in part to the fact that most developed countries have public health care systems which can be run much more cheaply than private concerns. This is also true of the publicly administered US Medicare system, which spends just two percent on administration compared with over ten percent in the case of private insurance companies.

As Hendrik Hertzberg puts it in the April 17 New Yorker, “In the United States, we spend fifteen per cent of our gross domestic product on health care, close to six thousand dollars per person. The French and the Canadians spend ten per cent of the G.D.P., about three thousand dollars per head. Yet their ‘health outcomes,’ measured by indices like longevity, are better than ours.”

Rather than deal with the problem head on, the HSAs pushed by Bush administration would make health care like car insurance, with sick people being the equivalent of teenagers with DUI convictions.

Talk about a goat rope. As bad ideas go, this one is almost up there with nuking Iran or starting an unnecessary war in Iraq. 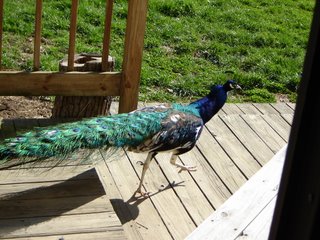 Caption: While jogging and regular exercise are good for health, they are not enough, even for peacocks. We need health care for all.

Around the country, many groups are preparing for Cover the Uninsured Week, which begins May 1. Goals for the week's events include raising awareness about the growing number of Americans without health care and sending a message to Congress that health care should be a top priority. (See www.covertheuninsured.org.)

Over the last few weeks, Goat Rope has provided a number of factoids on health care issues. Here are some fresh ones:

*Most Americans without health coverage work and many would be considered middle class. In 2004, 8 in 10 uninsured people came from working families. In 2004, more than 1/3 of the uninsured earned more than 200% of the federal poverty level of $38,600 for a family of four.

*While health care costs have increased, wages haven't. Between 2000 and 2005, wages were largely stagnant for many US workers, but health care premiums increased by over 70%.

*Health care costs account for a large number of bankruptcies. They are factors in more than half of all cases and have been estimated to directly cause 28%. (For a WV take on the issue with national links, check out www.wvahc.org)

Perversely, the Bush administration blames the US health care crisis on the bizarre assumption that the problem is that we have too much health care and don't pay enough for it. Goats permitting, that will be the subject of tomorrow's rant.

GOAT ROPE OF THE WEEK: IRAQ 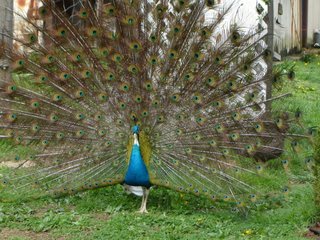 Caption: Mr. Mojo Risin'. Goat Rope beauty and personal hygiene correspondent Ferdinand adds his voice to the growing chorus of those calling for the resignation of Defense Secretary Donald Rumsfeld.

It wasn’t even close. The unnecessary war in Iraq is the hands down “winner” of the Goat Rope of the Week “Award.” In fact, situation there is such that it is hard to imagine any outcome to which the words “goat rope” would not apply.

To date, the war has cost the lives of nearly 2,400 US troops and tens of thousands of Iraqis. Nearly 17,500 troops have been wounded.

The war has made the United States less secure than before. It has placed incredible stains on military families and the military itself. It has provided a rallying point and a training ground for future terrorists.

According to a recent Zogby poll, the majority of US soldiers in Iraq believe they should be withdrawn within a year. And financially, the war has driven up the deficit and consumed resources that could have been better spent elsewhere.

Based on Congressional appropriations, the National Priorities Project estimates the cost of war to be over $274 billion to the US and $795 million to West Virginia. To get an idea of how much that is and what could have been done with it, NPP estimates that the money spent on the war in Iraq could have:

*sent over 36 million more kids to Head Start for a year;

*provided health insurance to nearly 164 million children for a year;

*funded basic immunizations for every child in the world for 91 years.

For detailed information on US casualties, check
http://icasualties.org/oif/

Meanwhile, a growing number of retired generals have called for the resignation of Defense Secretary Donald Rumsfeld. El Cabrero must argue that Rumsfeld, however disastrous as Defense Secretary, still deserves a position as Mad Poet in Chief. Who else could have come up with such immortal lines as these from 2003: