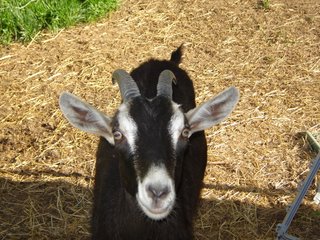 Goat Rope is pleased to feature another contribution on ancient Greek culture and tragedy by alpine goat Cornelius Agrippa.

Cornelius is Dean of Classical and Alchemistical Studies at Goat Rope Farm. His previous weekend commentaries can be found in the Goat Rope archives.

It is our fondest hope that features such as this will promote greater appreciation of both the humanities and the animalities and elevate the current level of cultural discourse.

Disclaimer: The opinions expressed by the talking animals are not necessarily those of the Goat Rope staff and management. But they might be.

OK so like if you come from a really messed up family, you should check out Greek tragedy and then you'll feel a lot better.

Unless your family is like really jacked and you eat relatives, sacrifice your kids and kill and/or marry your parents. Then it will seem pretty normal.

Take the Oresteia trilogy by Aeschylus. It's the only trilogy of Greek tragedy that survives because the people who came after the Greeks were too stupid to save them.

It's about the family of Atreus, who was a mega-jerk. One time he killed his brother's kids and fed them to him without the guy knowing it. Only one survived. His name was Aegisthus. Remember him.

Anyway so like Agamemnon is Atreus' son and he becomes king of the Mycenaeans and leader of the Greek expedition to Troy. Only he ticks off the goddess Artemis by being a jerk.

So then he sacrifices his daughter, Iphigenia, to chill out Artemis and get good winds to Troy. When his wife, Clytemnestra, finds out, she is ticked. She out to be on the all-time List of Women Not to Tick Off.

So while Agamemnon is busy being a jerk in Troy, she takes up with Aegisthus and when El Jerko gets back, she kills him in a bath tub, which probably made the whole clean-up thing easier.

Then her son Orestes has to kill her because the gods demand it. Only it is heavy hoodoo to kill your mom. My mom Venus would kick my butt if I even looked at her funny and she doesn't have horns.

So then Orestes is haunted by the Furies, who are these scary underworld goddesses who punish blood guilt. Orestes is kind of punked by fate because the gods told him to avenge his father and then these goddesses are out to avenge his mother because he did.

You'll have that sometimes.

So finally the gods Apollo and Athena set up at trial by jury in Athens for Orestes. He gets cleared by a margin of one vote after they make a deal with the Furies to chill them out.

And that's like how the rule of law and trial by jury came about and put an end to blood vengeance.

It probably would have been better if Atreus' old man had a vasectomy but that would have ruined the whole tragedy. Plus I don't think they did that very well back then.

There. Your family doesn't look so bad now, does it?