SYMPATHY FOR THE DEVIL: GETTING DOWN WITH MACHIAVELLI 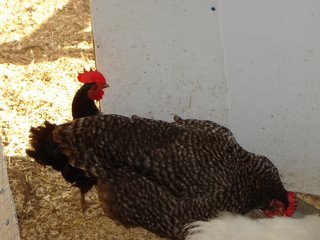 Caption: There are certain advantages to being the prince (such as BIG hens).

This is the third post in a lighthearted series on reading Machiavelli's The Prince for fun and profit.

If this is your first visit, please scroll down to the earlier entries.

As mentioned earlier, Machiavelli believed in, wrote about, and suffered for republican government, liberty, and lots of good stuff. He wrote about these things mostly in his Discourses on Livy. But he believed in playing with the cards we are dealt.

The Prince, written in 1513, was dedicated to Lorenzo di Medici (not THE Lorenzo), current leader of Florence. It can be seen as part of a fairly common genre of advice to rulers, as a job application, and/or as a critique of Medici rule.

As mentioned earlier, it can be seen as Machiavelli's immediate program of restoring a measure of order and expelling foreigners, which he believed had to be done before a decent republic could be restored.

Most of the advice in The Prince is directed not to hereditary monarchs. He believed the main thing these needed to do was not screw up. Instead, his advice is directed mostly to those who acquired their position through energetic action (virtu), lucky circumstances (Fortuna), or a combination.

Most people who know The Prince at all know its naughty, wicked parts, which seem to imply that the end justifies the means. To be sure, there are parts where he discusses things like the desirability of being both loved and feared; the ability to seem good but to do otherwise when the situation requires; and the skillful and unskillful use of cruelty.

And, for the record, El Cabrero is opposed to all wickedness and naughtiness. But there are plenty of things in the book that are interesting to think about for anyone interested in history, public life, and strategy.

For starters, we can learn from his approach to history itself.

Old Nick was both a practiced politician under the earlier republic and a major and unprejudiced student of history. He scoured contemporary and ancient sources for useful lessons. While he did not believe that history repeated itself or followed any kind of laws, nevertheless he believed people interested in public life could learn a great deal from the successes, mistakes, and disasters of the past.

Every situation is unique and successful outcomes are likely to arise from skillfully adapting to and seizing the opportunities of the present. One of the main conclusions he draws from his study of history is that similar actions in different conditions produce different outcomes.

As he wrote in the introduction to The Prince,

I have been unable to find among my possessions anything which I hold so dear or esteem so highly as that knowledge of the deeds of great men which I have acquired through a long experience of modern events and a constant study of the past.

For what it's worth, while El Cabrero is no prince, he has found a study of history to be very valuable in his day job of working for economic justice. That would include not only the history of social movements but of continents, countries, campaigns, and cultures.

Next time: the perils of reform.