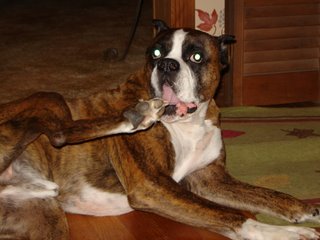 Once again, we must beg the reader's indulgence. Mr. Sege suffered a head injury whilst chasing a squeaky toy and as a result has sometimes been known to transpose the plots of movies.

Indeed, as the photo indicates, he has been known to put his foot in his mouth.

Nonetheless, we believe that his insights into the world of cinema more than compensate for this regrettable shortcoming.

It is our hope that these weekend features will elevate the level of public discourse and promote greater appreciation of both the humanities and the animalities.

OK so Amadeus is a movie about music. There's this guy Mozart who was a child prodigy till he grew up but then isn't a child but is still a prodigy.

Doodus says I eat a prodigious amount of popcorn...

Anyway, he goes to Vienna to make music for the emperor but his dad is mad about it.

Everything goes OK till there's a total eclipse of the sun where he finds this plant that talks, sings and eats people.

The plant eats his dad, who is also a mean dentist.

Amadeus is all torn up about it and decides to be a heavyweight boxing champ. When he trains, he runs up these stairs in Philadelphia and punches on a side of beef.

I wonder what they did with that meat?

The symbolism of the movie is complex. The music symbolizes sounds, with tones, notes, rhythm, harmony, melody, and stuff.

Amadeus' conflict with his father is what happens when you have a talking plant that eats people. Since that happens a lot, there must be a lot of plants like that.

That makes him want to be a boxer.

So what do you think they did with that meat? That would go good with popcorn.

The bad ones are not good for much and you don't get much fun out of them until you push them down a flight of stairs.

I'm sure he will be OK in a few days.