THE LIMITS OF UTOPIA: SAMSARA, SIN AND ALL THAT 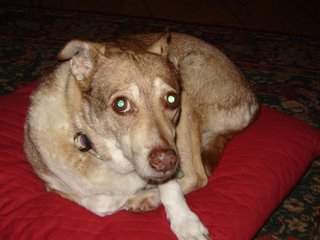 Caption: For Lily, utopia would be her Mom, food, and stinky dead things to roll around in. And maybe a fireplace.

This is the third post in a series about what a just society might look like. If this is your first visit, please scroll down to the last two entries.

This series was inspired by a challenge from a Goat Rope reader to others to think about this as a way of starting to achieve it. The first two posts laid out very generally what some of the ingredients might be.

This one is about the limits to how far we get.

Sneak preview: El Cabrero believes the Buddhists, ancient Greeks, Christians, Walt Whitman, the existentialists, and Freud are onto something.

First, the Buddhists. Methinks life inherently involves suffering and is impermanent and insubstantial. They talk about six major kinds of suffering: birth (I've seen it happen and the little ones don't seem to be having a lot of fun); death (or at least a lot of the stuff that usually comes before or with it); sickness (especially if you are male and there are catheters involved); aging and loss of abilities (I can vouch for that); having what you don't want (self explanatory); and wanting what you can't have (ditto).

Second, the Greeks and Christians (some of them anyway). El Cabrero may not pass rigorous test of theological orthodoxy, which makes it handy to be an Episcopalian, but I'm with the program when it comes to sin or hubris (Goat Rope readers excepted, of course).

Individuals and especially groups tend to over- or under-reach, view themselves as the center of the world, and do harm to each other, themselves, nature, etc. I think that's a permanent feature of the model. And that's reason #243 why any social system needs checks and balances to limit the amount of harm we can do to each other.

Third, Walt Whitman. Like Gloria Radnor used to say on Saturday Night Live, "it's always something." That's true even when we make substantial progress on some things. Here's Walt:

Have the past struggles succeeded?
What has succeeded? Yourself? Your nation? Nature?
Now understand me well--it is provided in the essence of
things that from any fruition of success, no
matter what, shall come forth something to
make a greater struggle necessary (Song of the Open Road)

Fourth, the existentialists. There is an element of absurdity and tragedy in human life. You'll just have that sometimes. And although Albert Camus disliked the label of existentialist, he's close enough for Goat Rope. In The Rebel, he said:

Man [sic] can master in himself everything that should be mastered. He should rectify in creation everything that can be rectified. And after he has done so, children will still die unjustly even in a perfect society. Even by his greatest effort man can only propose to diminish arithmetically the sufferings of the world. But the injustice and the suffering of the world will remain and, no matter how limited they are, they will not cease to be an outrage. Dmitri Karamazov's cry of "Why?" will continue to resound; art and rebellion will die only with the last man.

Fifth, Freud. Living in civilization, such as it is, involves a certain amount of frustration or discontent since we can't run around doing all the things we sometimes think about without getting in big trouble. And that is not altogether a bad thing.

Maybe the art of politics, broadly conceived, is to try to remove as much as we can of unnecessary suffering and deal with the rest the best we can.

Next time: bad and good and which we notice more.