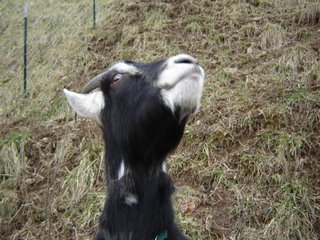 This weekend we are pleased to introduce alpine goat Cornelius Agrippa, Goat Rope Farm Dean of Classical and Alchemistical Studies.

Cornelius, who scorns academic titles, will provide the next few weekend commentaries on ancient Greek culture, with a particular focus on Greek drama.

This is part of Goat Rope's ceaseless efforts to elevate popular discourse and promote a greater appreciation of both the humanities and the animalities.

Do you know why the Greeks were so much cooler than you guys? It's because of the goats. Ancient Greeks were all about goats.

If it wasn't for goats, there wouldn't have even been any Greek gods. Zeus, the king of the gods, was actually taken care of when he was a baby by the goat Amaltheia when he was hiding from his old man Cronus in Crete.

Zeus liked her so much he put her in the stars as Capricorn. He even borrowed one of her horns which became the cornucopia, the horn of plenty. We taught him everything he knew and then he taught the rest of them.

And did you know that the word tragedy comes from the Greek words for "goat song?" Greek drama grew out of the festival of Dionysus, god of wine, who had a thing for goats. His buddies were satyrs which were part...guess what?

But the Greeks weren't perfect. For one thing, they ate too much goat meat. And then they used goat skins to hold wine. That was way uncool. I say if you want to put wine in a goat skin, put it in a living one!