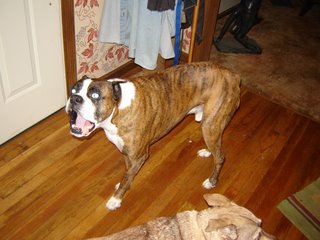 Caption: This man has become a monster.

John Quincy Adams had a distinguished career as a public servant. The son of one of the key founders of the nation, he served as diplomat, congressman, secretary of state and president. He was also an early and vocal opponent of slavery.

In 1821, he gave a speech that set forth the best of what the United States stands for and warned of consequences of departing from that high standard. His words now seem like a warning and a prophecy.

Recalling the values set forth in the Declaration of Independence, Adams said:

America, with the same voice which spoke herself into existence as a nation, proclaimed to mankind the inextinguishable rights of human nature, and the only lawful foundations of government.... She has uniformly spoken among them, though often to heedless and often to disdainful ears, the language of equal liberty, of equal justice, and of equal rights. She has, in the lapse of nearly half a century, without a single exception, respected the independence of other nations while asserting and maintaining her own.

Adams believed that the United States would be strong and would be a positive force among the nations of the world to the extent that it led by example and lived by the values it professed. But if it succumbed to temptations of empire, it did so at a great cost to its citizens and the world at large. Indeed, echoing the words of Jesus, he warned that it would be in danger of losing its soul even though it gained the world.

He said of the nation, "Wherever the standard of freedom and Independence has been or shall be unfurled, there will her heart, her benedictions and her prayers be. But she goes not abroad, in search of monsters to destroy."

Were America to depart from its ideals and engage in aggressive actions beyond legitimate self-defense, he believed, "she would involve herself beyond the power of extrication, in all the wars of interest and intrigue, of individual avarice, envy and ambition, which assume the colors and usurp the standard of freedom. The fundamental maxims of her policy would insensibly change from liberty to force."

He warned that though the nation "might become the dictatress of the world. She would no longer be the ruler of her own spirit."

Adams' warning about the perils of gratuitous monster-hunting is one that should not be taken lightly. As the philosopher Nietzsche said, "He who fights with monsters should look to it that he himself does not become a monster. And when you gaze long into an abyss the abyss also gazes into you."